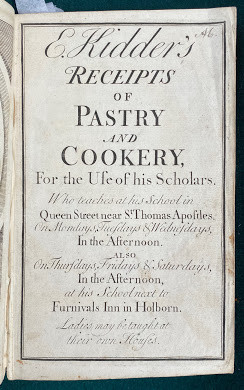 Kidder's Receipts of Pastry and Cookery, For the Use of his Scholars.

engraved throughout, includes the first recipe for puff pastry

Kidder's Receipts of Pastry and Cookery, For the Use of his Scholars. Who teaches at his School in Queen Street, near St. Thomas Apostles On Monday, Tuesdays & Wednesdays in the Afternoon. Also at his School next to Furnivals Inn in Holborn. Ladies may be taught at their own houses. [London, undated but 1733/34 or earlier]. Octavo (7 ¼ x 4 ½ins; 184 x 114mm). Engraved throughout, 51 (of 52) leaves: portrait frontispiece of Kidder by 'Rob. Sheppard', title (a cancel, verso blank), 40 leaves (recto only) listing 170 'receipts', 1 leaf 'Order for Bills of Fare' (recto only) 1 'Index' leaf (recto only), 7 (of eight) plates only (lacking the folding plate ‘Floredines [sic.] Torts...', but a folding facsimile is loosely inserted in its place).

Contemporary sheep over pasteboard, covers paneled in blind with rolls and rules and fleuron cornerpieces

Faults with binding: worn, spine with areas where the leather is lacking, joints split but cords holding, corners worn, some old silverfish damage to leather on covers.

Engraved throughout: a scarce handbook apparently produced for students at the earliest known cooking school in England, run by Kidder (d. 1739) in various London locations during the 1720s-30s.

This work "is a valuable record of 170 standard English dishes of the day, accompanied by attractive designs for pie shapes and decorations. The first recipe for puff pastry (identical to the standard commercial product of today) to appear in print is Kidder's" (ODNB).

A reissue of an earlier edition, with a different title page; additional text added to leaves F2 and H1 resulting in the final line of text on both leaves being on the same level as the alphabetical numbering system; a different index leaf without "Finis" at foot and with the alphabetical numbering system in the inner margin; with the possible addition of leaf K2 and the leaf of illustration containing 'Lamb pastey' and 'Wilde Boar Pye'.

ESTC T92424 incorrectly describes this as "a reissue of the 1740 edition": i.e. it was printed in 1740 or later. This is incorrect, as there was a copy of this issue sold by Swann’s in NYC in 2016 which included an inscription by its original owner which noted that it was ‘her book February the 12th 1733/4 the day I began learning of Mr. Kidder'.

An Abridgement of Portlock and Dixon's Voyage Round the World, performed in the years 1785, 1786,&hellip;