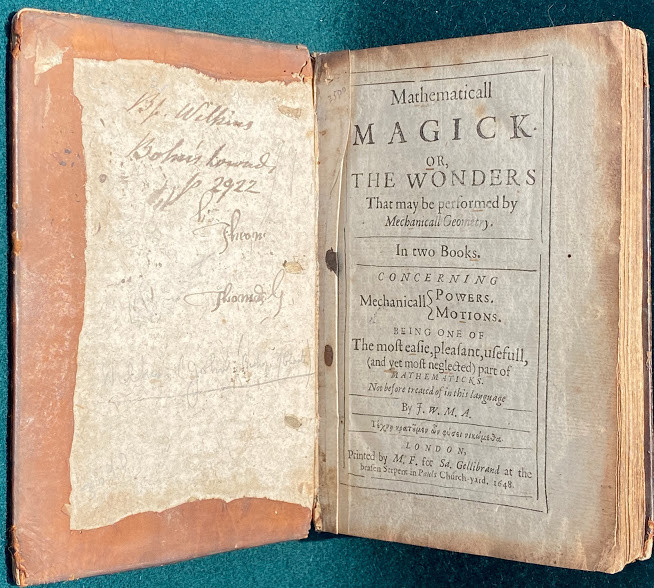 Mathematicall Magick, or, the wonders that may be performed by Mechanical Geometry.

A charming copy of a charming work by “the wisest clergyman I ever knew. He was a lover of mankind, and had a delight in doing good." (G. Burnet)

Title: Mathematicall Magick, or, the wonders that may be performed by Mechanical Geometry. In two books. Concerning Mechanical Powers, Motions. being one of the most easy, pleasant, useful, (and yet most neglected) part of mathematicks. Not before treated of in this language. By J.W.

Binding: Contemporary speckled calf, ruled in blind (spine chipped at head and foot, splits to joints, corners rubbed, but excellent none the less).

An excellent copy of the first edition of this free-wheeling, wide-ranging work with more on mechanics than mathematics – "... the first text on mechanics available in the English language . . . describing various machines, including strange devices and possibilities, such as a land vehicle powered by wind, submarines, flying automata, clocks, magnetic perpetuum mobile, etc."--Bibliotheca Mechanica, page 354.

There two issues of the title page noted by ESTC (and Wing): they don't assign precedence to either. ESTC R227427 (title reads 'wonders', 'powers' and 'J.W.' and  ESTC 6164 (title reads 'vvonders', 'povvers' and 'I.W.'). Neither include a frontispiece which was not included until the 1680 was issued.

"Much of Mathematical Magick discusses the operation of machines for raising water, such as those which Wilkins had in his garden at Wadham. In general, the book embodied the notion that the quality of human life could easily be improved through the application of experimental knowledge. This was an idea that many linked to the re-establishment of mankind's dominion over nature, which had been lost at the fall." Bennett & Mandelbrote Biblical Metaphors of Knowledge in Early Modern Europe, p. 62 - Wing W.2199 - cf. Honeyman VII-3120 - DSB XIV.361-380; cf. Tomash & Williams W74 - ESTC R227427

"John Wilkins, FRS (14 February 1614–19 November 1672) was an Anglican clergyman, natural philosopher and author, and was one of the founders of the Royal Society. He was Bishop of Chester from 1668 until his death.

Wilkins is one of the few persons to have headed a college at both the University of Oxford and the University of Cambridge. He was a polymath, although not one of the most important scientific innovators of the period. His personal qualities were brought out, and obvious to his contemporaries, in reducing political tension in Interregnum Oxford, in founding the Royal Society on non-partisan lines, and in efforts to reach out to religious nonconformists. He was one of the founders of the new natural theology compatible with the science of the time. …

Wilkins lived in a period of great political and religious controversy, yet managed to remain on working terms with men of all political stripes; he was key in setting the Church of England on the path toward comprehension for as many sects as possible, "and toleration for the rest".

Gilbert Burnet called him "the wisest clergyman I ever knew. He was a lover of mankind, and had a delight in doing good."

His stepdaughter married John Tillotson, who became Archbishop of Canterbury….

The early scientific works were in a popular vein, and have links to the publications of Francis Godwin. The Discovery of a World in the Moone (1638) was followed up by A Discourse Concerning a New Planet (1640). The author highlights the similarities between the Earth and the Moon. Based on these similarities, he proposes the idea that the Moon would house living beings, the Selenites. Godwin's The Man in the Moone was also published in 1638. In 1641 Wilkins published an anonymous treatise entitled Mercury, or The Secret and Swift Messenger. This was a small work on cryptography; it may well have been influenced by Godwin's Nuncius inanimatus (1629)....

[The present work] Mathematical Magic (1648) was divided into two sections, one on traditional mechanical devices such as the lever, and the other, more speculative, on machines. It drew on many authors, both classical writers and moderns such as Guidobaldo del Monte and Marin Mersenne. It alludes to Godwin's The Man in the Moone, for bird-powered flight. These were light if learned works and admitted both blue-sky thinking, such as the possibility of the Moon being inhabitable, and references to figures on the "occult" side: Trithemius, John Dee, the Rosicrucians, Robert Fludd. ….

In 1654, Wilkins joined with Seth Ward in writing Vindiciae academiarum, a reply to John Webster's Academiarum Examen, one of many attacks at the time on the universities of Oxford and Cambridge, and their teaching methods. This attack had more clout than most: it was dedicated to John Lambert, a top military figure, and was launched during Barebone's Parliament, when radical change seemed on the cards. Wilkins (as NS) provided an open letter to Ward; and Ward (as HD, also taking the final letters of his name therefore) replied at greater length. Wilkins makes two main points: first, Webster is not addressing the actual state of the universities, which were not as wedded to old scholastic ways, Aristotle, and Galen, as he said; and secondly Webster's mixture of commended authors, without fuller understanding of the topics, really was foolish. In this approach Wilkins had to back away somewhat from his writings of the late 1630s and early 1640s. He made light of this in the way of pointing to Alexander Ross, a very conservative Aristotelian who had attacked his own astronomical works, as a more suitable target for Webster. This exchange was part of the process of the new experimental philosophers throwing off their associations with occultists and radicals.. “ (Wikipedia) 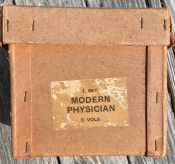 The Modern Physician being a complete guide to the attainment and preservation of health … by Dr.&hellip;

The Nature of an Intermitting Fever and Ague consider'd : wherein is explain'd, the cause of each&hellip;