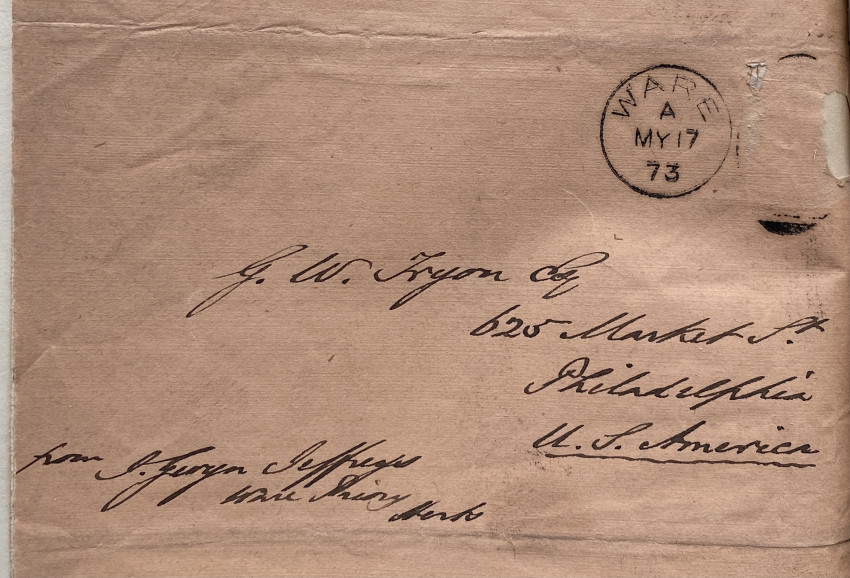 [28 off-prints or extracts, some a single page, bound in 16 volumes, some co-authored by Jefferys, some inscribed ]

Recipients include Alexander Agassiz, Wilhelm Dunker and others].

[28 off-prints, some a single page, bound in 16 volumes, some co-authored by Jefferys, some inscribed by him to Alexander Agassiz and others].

Jefferys ‘was born in Britain on 18 January 1809, at Swansea, Wales. … From the age of seventeen, he was an apprentice to one of the principal solicitors of Swansea, before going to London, where he qualified as a barrister in 1838. Jeffreys worked as a solicitor in Swansea until 1856, when he was called to the bar in London. But his greater passion was for conchology. He was not satisfied simply to form a collection, but was interested in all aspects of the biology of molluscs. On 2 April 1840 he became a Fellow of the Royal Society. … In 1866 Jeffreys retired from the law, and continued a series of dredging operations he started in 1861 aboard the yacht, Osprey, which he later purchased from his brother-in-law. Accompanied by other specialists in marine life such as Charles William Peach (1800-1886), the Reverend Alfred Merle Norman (1831-1918), George Barlee (1794-1861) and Edward Waller (1803-1873), he dredged the seas around the Shetland Islands, the west of Scotland, the English Channel and the Irish Sea. He also went on expeditions to Norway. He went on to take part in several deep sea expeditions as scientific leader - the Porcupine expeditions in 1869 and 1870, the Valorous expedition to Greenland in 1875, and the French Travailleur expedition in 1880. In or shortly after 1866 he moved from London to Ware in Hertfordshire, where he bought the Greyfriars Priory, and made it a meeting-place for many British and foreign artists. …. He was Treasurer of the Linnean Society of London and Geological Society of London for many years. Jeffreys was also a member of the British Association for the Advancement of Science. After the death of his wife in 1881, Jeffreys moved to Kensington, and he died there 24 January 1885. ? His principal work was his well known 'British Conchology,' in five volumes, the best on the subject. He was throughout his life a most indefatigable worker, and at time of his death was still actively engaged upon the description of the deep-sea mollusca dredged by the Lightning and the Porcupine expeditions. He read the ninth of his series of papers on this subject at the Zoological Society's meeting four days before his death’ (Shellers from the Past and the Present). (28 in 16 volumes).