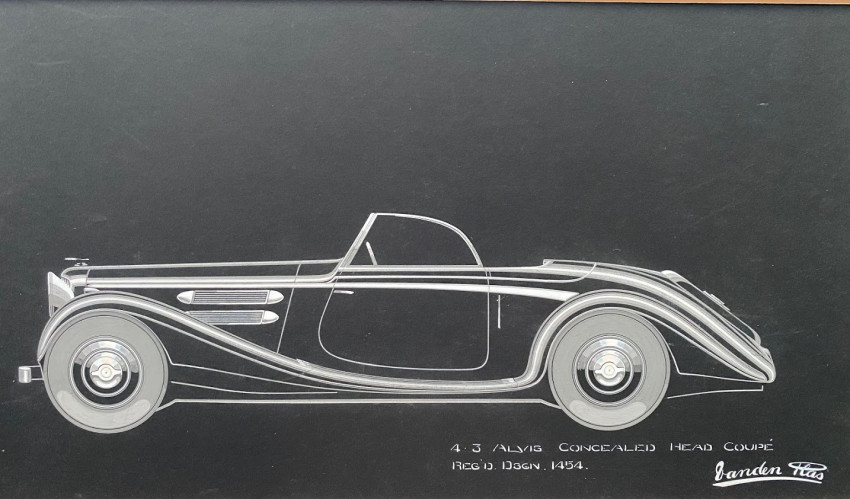 drawing by John Bradley, white line gouache and wash, on board

'In the scheme of things there are cars, good cars and supercars. When a machine can be put into the last of these three categories and yet is not by any means in the highest-price class, considerable praise is due to the makers. The model in question is the latest Alvis 4.3-litre sports tourer.' (The Autocar, August 1938). "Claimed to be the fastest un-supercharged saloon on the UK market, the Alvis 4.3-Litre was certainly one of the few pre-war saloons capable of a genuine 100mph. Sturdily built and endowed with a generous wheelbase, the Alvis six attracted some of the finest examples of the pre-war coachbuilders' art, though the 4.3-Litre's chassis-only price of £750 meant that ownership was necessarily confined to wealthy connoisseurs. A complete 4.3-Litre cost around £1,100, outstanding value for money given its specification and performance, and comfortably undercutting rivals such as the V12 Lagonda and 4¼-Litre Bentley. Despite this price advantage, only 198 cars had been delivered when the outbreak of World War 2 stopped production. Some 95 survivors are known to the Alvis Owners Club." (Bonhams/Riga Master Workshop).

'John Bradley was the designer at Vanden Plas and Brian Smith in his book on Vanden Plas describes him as Artist:Designer - note the capitals. Body design was something of a black art at the time. The position of industrial designer had yet to be established. In those days, designers were often picked by management from the drawing office and developed from draughtsmen who showed the elusive quality of "flair". Nobody could describe but most people knew it when they saw it... Bradley re-vitalised Vanden Plas following his appointment in 1931. He introduced a modern drawing office and had to overcome traditions that had existed since the days of the horse drawn carriage ... Beginning with beautifully executed line and wash drawings - ... - the body shape was drawn out full size and Bradley saw to it that every detail was worked out before construction began. Each artisan could then refer to the drawing and find all the information they wanted, a practice already adopted by other coachbuilders ... He also persuaded management to allow his scrutiny of the bodywork prior to painting and often roadtested the finished car himself.' (anarchadia.blogspot.com).

A COMPENDIUM OF KAFIR LAWS & CUSTOMS