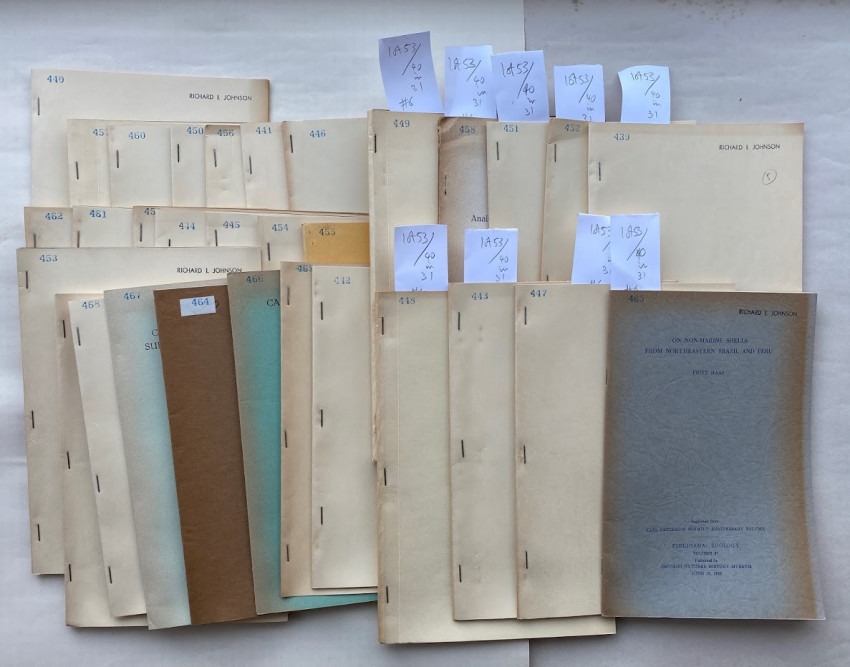 [A collection of 40 malacological works in German, English or Spanish , in 31 volumes, mostly extracts or off-prints, ]

14 inscribed, most of these read ‘vom verfasser’ (‘from the author’).

[A collection of 40 malacological works in German, English or Spanish , in 31 volumes,  mostly extracts or off-prints, 14 inscribed, most of these read ‘vom verfasser’ (‘from the author’)].

A collection of works from the man who, almost single-handedly, revitalized the collections of invertebrate zoology at the Field Museum

‘On October 20, 1967, The Field Museum honored Dr. Haas, Curator Emeritus of Lower Invertebrates, as he began his 60th year as a published scientist. At that time Dr. Alan Solem wrote a review which was published as a special supplement to the Chicago Shell Club's Newsletter, and which we quote here. In it Dr. Solem told of Dr. Has' two "lifetime" careers -- one of more than thirty years at the Natur-Museum Senckenbeg in Frankfurt, Germany, and the second of "only" twenty-nine years at The Field Museum of Natural History. At that time Dr. Solem remarked: "Few people have had a distinguished career of thirty working years. We are proud and grateful that Fritz Haas' second thirty-year career is being spent at The Field Museum of Natural History." Fritz Haas published his first papers, on freshwater clams, on October 20, 1907. On October 20 of 1967 he was waiting for page proof of two long papers -- on freshwater clams. In the intervening years he had written over 275 technical articles and books; included in these papers were descriptions of 385 new species and genera of mollusks. It was in mid-1936 that Fritz Haas, a gentle and kindly man, had to leave his job in Frankfurt, the growing governmental persecution of people belonging to the Jewish faith having penetrated even into the museums. He arrived in the United States during the depression; it was only after considerable difficulties that The Field Museum was able to appoint him Curator of Lower Invertebrates on August 1, 1938. Dr. Haas came to a museum that had never had an invertebrate zoologist, whose only mollusk collection consisted of leftover display material from the Columbian Exposition of 1893, and which lacked most of the specialized molluscan literature. With the strong backing of the administration and Museum President Stanley Field, he began to develop library and collection facilities. With only part-time student help, he reclassified and relabelled all existing invertebrate specimens, processed new collections, and by 1956 had registered 55,000 sets of shells. The library was now the finest west of the Atlantic seaboard. A linguist, with a working knowledge of twelve tongues, and after a lifetime of voracious reading, he served as a major staff resource. Since 1938, librarians and scientists depended upon him for help with European references, cryptically abbreviated locality labels, and letters for translation ... When Alan Solem was appointed Assistant Curator in 1957 it marked his first time in his working career that Dr. Haas had a full-time associate or assistant. Progressively freed from routine duties and administrative responsibilities, Fritz Haas devoted mornings to identifying and cataloging, afternoons to research. Until he suffered a stroke in late 1965, he processed about 5,000 sets a year into the collection.’ (Shellers from the Past and the Present). (40 works in 31 volumes)