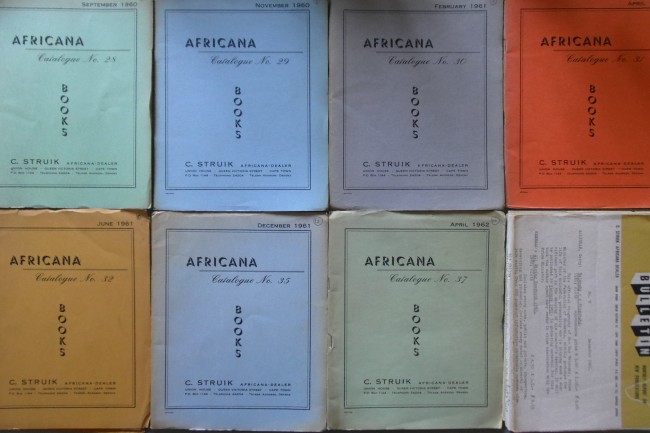 The collection comprises Struik's Africana catalogues 28-32, 35 and 37, published between September 1960 and April 1962, and military history, Africana, Afrikaans literature (2), official documents and new publication price-lists published between October 1960 and December 1961. In the first of these catalogues prices were quoted in South African pounds and dollars, soon to change to rands and dollars.

Many book collectors today would benefit from time travel that gave them access to catalogues typically running up to 56 pp and 700 items. Sample entry:

Not everything seems to have been cheap, however, which first series Van Riebeeck Society volumes 1-23 priced between three and nine guineas.

As if these offerings were not enough, Struik wrote:

"This catalogue contains only a small part of our stock. If you do not see the books you require please send a list, which will have our best attention."

This catalogue selection coincided with the sale of Patrick Duncan's Africa Books of Rondebosch to Struik, part of whose Union House, Queen Victoria Street, Cape Town, premises are shown in the images.