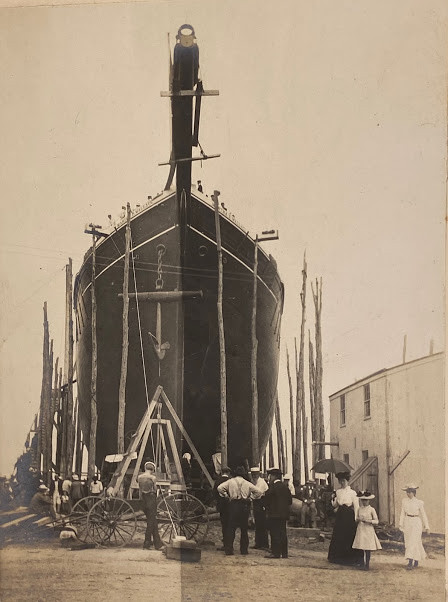 An original carbon-copy typescript, titled ‘Thesis. A Study of the Launching of the “Martha E. Wallace”. Hewitt Crosby. May 1903’

An original carbon-copy typescript, titled ‘Thesis. A Study of the Launching of the “Martha E. Wallace”. Hewitt Crosby. May 1903’. Quarto (10 ½ x 8in; 267 x 203mm). 1-page title and 41 pages of text (verso only of 41 leaves), signed by Crosby at the foot of the final page;  followed by 9 original photographs, each preceded by a leaf with brief carbon-copy typed explanation of what the image showed; then a section of 9 blank leaves intended for notes; then 5 blueprints by Crosby (2 large and folding, 2 folding, 1 single page). Condition of contents: light fading to photographs, some unnecessary creasing to the two large blueprints, otherwise excellent. Original green/blue half morocco over blue cloth-covered boards, bound by Alexander Moore of Boston, spine lettered in gilt, patterned endpapers. Condition of binding: rubbed.

Provenance: Mather & Wood (presentation copy, inscribed by Crosby “With thanks / to / Mather & Wood” on the front free endpaper).

A detailed record of the launching of the “largest wooden sailing vessel ever built in Port Jefferson”. In the present work Massachusetts Institute of Technology student, Crosby, describes and pictures many aspects of the launch of the schooner. Probably one of three copies: 1. submitted to M.I.T. as part of Crosby’s  work towards gaining a Degree of Bachelor of Science, and now in their archives (OCLC 39163650); 2. The present example presented as a ‘Thank you’ to the shipbuilders who agreed to Crosby’s experiment; and (probably) 3. Crosby’s own copy. After graduating from M.I.T., Crosby went on to have a solid life-long career in the ship-building industry.  The ‘Martha E. Wallace” was an 1100 ton four-masted cargo schooner owned by Amos D. Carver and others of New York City.  For his thesis Crosby designed and built a device that measured and recorded the speed of the “Wallace” as she slid down the ways during her launch: a great deal of technical information on the launching was discovered and recorded. Also, Crosby goes into detail about the construction of the ship and the ways beneath her – illustrating the text with some fine gelatin silver print photos (5 x 7 ½ inches and smaller), and his own blueprints, including two which are over 5 feet long).