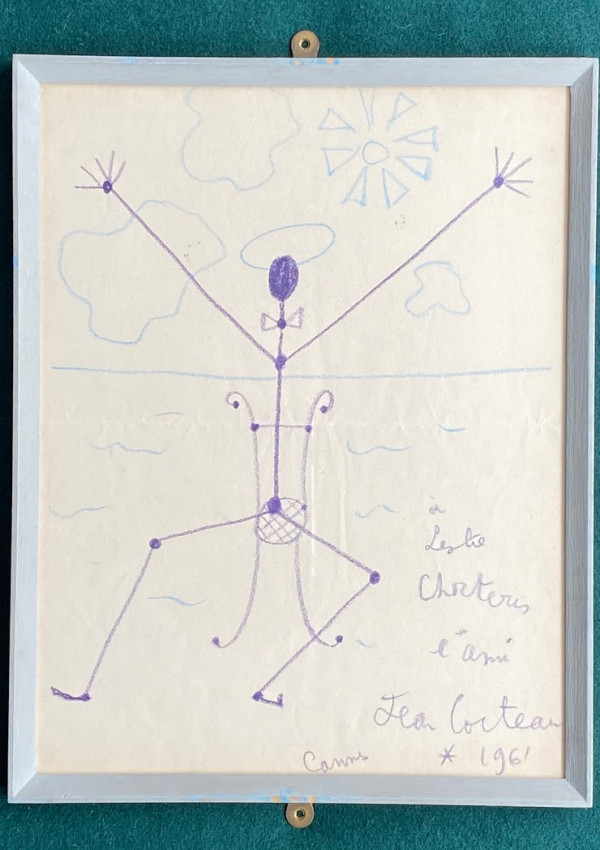 An original coloured drawing of ‘The Saint’ stick-figure, seated on a chair, arms raised and spread wide, the sun and sea behind

Cocteau and Charteris may have encountered each other when discussions were under way about the possibility of making a movie of one of Charteris’s books. In 1966, Cocteau’s long-time companion/lover Jean Marais played The Saint (aka Simon Templar)  in the  movie "Le Saint Prend L'Affut (The Saint Lies in Wait)". Other actors who played The Saint include George Sanders, Vincent Price, Roger Moore, Ian Ogilvie and Val Kilmer.

‘Simon Templar is a Robin Hood-like criminal known as The Saint — plausibly from his initials; but the exact reason for his nickname is not known (although we're told that he was given it at the age of nineteen). … Blessed with boyish humour, he makes humorous and off-putting remarks and leaves a "calling card" at his "crimes", a stick figure of a man with a halo. This is used as the logo of the books, the movies, and the 1960s TV series. He is described as "buccaneer in the suits of Savile Row, amused, cool, debonair, with hell-for-leather blue eyes and a saintly smile..." ‘ (Wikipedia)