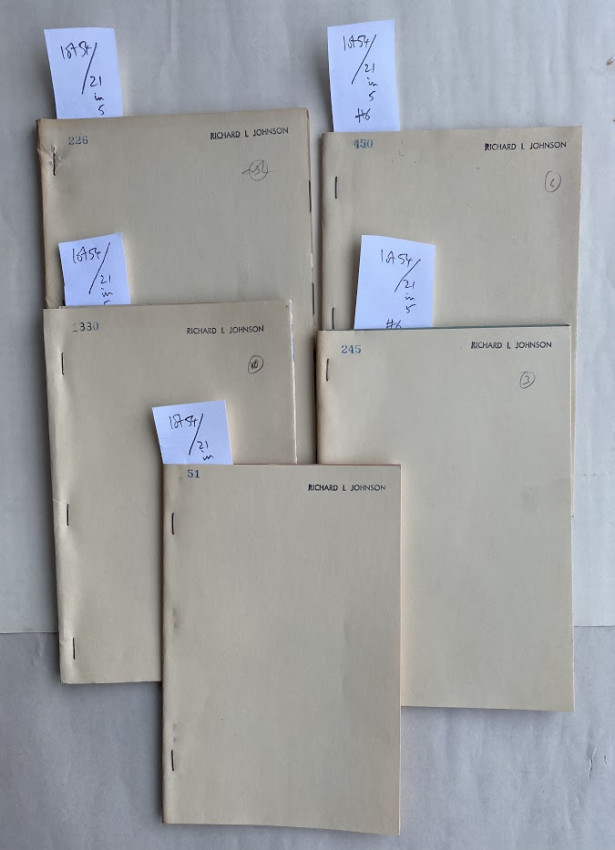 [AUSTRALIA. – a collection of 21 malacological works in five volumes, mostly off-prints or extracts, a few inscribed by Brazier].

[AUSTRALIA. – a collection of 21 malacological works in five volumes, mostly off-prints [some single page] or extracts, a few inscribed by Brazier].

1.Catalogue of the Marine Shells of Australia and Tasmania. Part I. Cephalopoda. [… Part II.Pteropoda; … Part III. Gasteropoda Murex]. Sydney: 1892-92-93. 3 parts in one volume,  octavo. Extra-illustrated with Brazier’s  3pp. ‘List of Cephalopoda in the Collection of the Australian Museum’. Green upper wrappers to parts I and II only (lacking all lower wrappers and upper wrapper to part III, damage to part I wrapper with loss), stapled into cream paper wrappers. Provenance: Alexander Agassiz (part signature to part I); ‘Clench Duplicate’ stamps to parts I and II; Author’s presentation inscription to part III. The pagination is continuous between the three parts.

‘John William Brazier (1842-1930), conchologist, was born on 23 September 1842 in Sydney … His father, who collected shells as a hobby, was captain of a whaler which visited many islands of the southern Pacific in the 1850s. Brazier junior… accompanied his father on one of those cruises about 1855 and acquired an interest in natural history, especially shell collecting. …  Brazier's reputation as a collector grew and in 1865 he was invited to accompany Julius Brenchley on the cruise of H.M.S. Curacoa to Norfolk Island, Samoa, Tonga, Fiji, the New Hebrides, the Solomons and New Caledonia. Brazier collected wherever possible, even while under attack by natives at Eromanga, New Hebrides. In 1866 he again visited New Caledonia where Richard Rossiter was living. In 1871 he accompanied an expedition of Australian scientists to the Claremont Islands in the Great Barrier Reef to view an eclipse of the sun on 12 December, the so-called 'Eclipse' expedition. In 1872 he accompanied H.M.S. Blanche on a cruise to the Solomon Islands, New Guinea and the Marshall Islands. In 1873 he again visited Noumea, New Caledonia, and in 1874 undertook a dredging cruise in the ketch Pea Hen along the coast of New South Wales, collecting on behalf of Sir William Macleay…  In 1875 he was a member of Macleay's expedition in the Chevert to New Guinea via the Great Barrier Reef, and extensive collections were made… ; most of the specimens are now in the Macleay Museum at the University of Sydney. Brazier's later collecting activities were largely along the New South Wales coast. In 1880 he was employed by the Australian Museum to assist in cataloguing the shell collection, and one of his first tasks was to take part in an expedition to Port Stephens where large collections were made. Brazier was soon given the official position of conchologist and also placed in charge of the ethnological, historical and numismatic collections. By 1891 the shell collections had grown so large that Brazier was relieved of other duties to concentrate on marine shells alone, while Charles Hedley joined the staff and was given responsibility for land and freshwater shells. … Brazier was prominent in scientific circles in the 1870s and 1880s. He was a member of Macleay's small group of naturalists who founded the Linnean Society of New South Wales in October 1874, and his paper describing new species of shells was the first to be published in the society's Proceedings. Between 1869 and 1905 he published over 150 scientific papers and notes, mostly on shells. After his connection with the museum was severed, he continued writing and as late as 1905 exhibited specimens at the Linnean Society meetings, but his interest in science seemed to wane. He lived in Sydney, sometimes visiting the Australian Museum. He sold shells from his private collection to Charles Hedley who succeeded him as conchologist; they were given to the museum by Hedley and now form a substantial part of its shell collection. Brazier's scientific writings were listed in 1958 by Tom Iredale, who also published an index to his new scientific names. Brazier corresponded regularly with a large number of prominent conchologists and made exchanges so widely that shells collected by him are now in many natural history museums of the world. In the 1870s he sent many specimens to England for description by George French Angas who named many species after him. In 1872 Brazier married Sophia Sarah Jane, sister of George and Richard Rossiter. She shared his interest in conchology and he named several species of shells after her. Aged 38 she died in 1882, survived by three daughters.’ (Shellers from the Past and the Present) . (21 in 5 volumes)