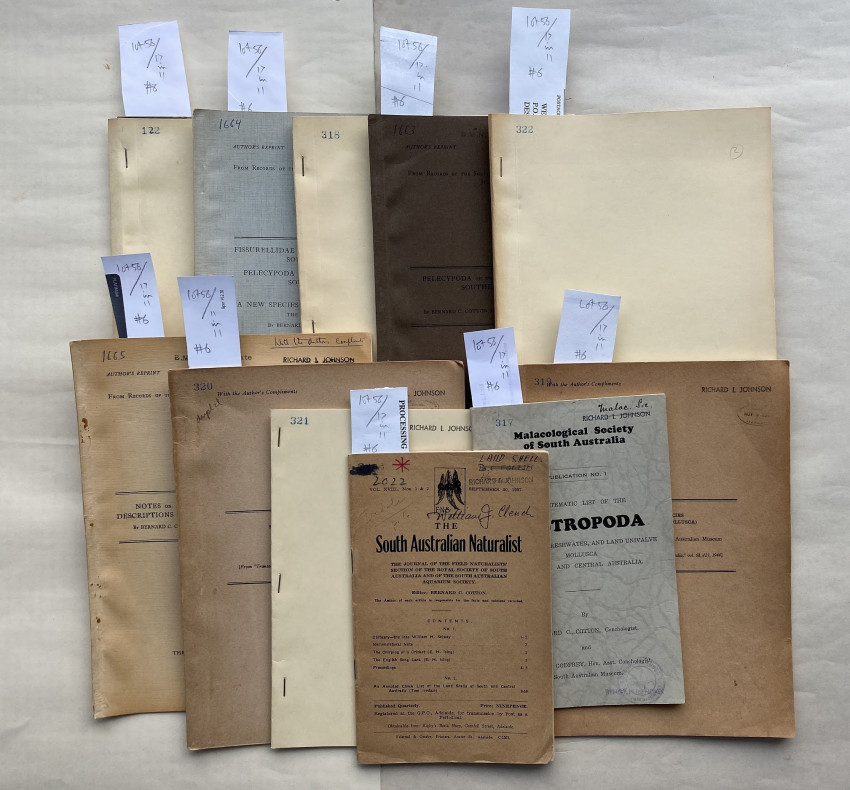 [AUSTRALIA, NEW ZEALAND, etc.: a collection of 17 malacological works in 11 volumes, including off-prints].

Authored or co-authored by Cotton, and including works presented by the author

[AUSTRALIA, NEW ZEALAND, etc.: a collection of 17 malacological works in 11 volumes, authored or co-authored by Cotton, including off-prints, and works presented by the author].

5.–17.[seven volumes containing 12 works, mostly off-prints, most concerning Australian shells, most published in Australia, including a number works which were presented by the author, see images for some examples].

‘Cotton was born in Sheffield and immigrated, with his parents, to South Australia in 1923. Within a few months of his arrival he joined the staff of the South Australian Museum in Adelaide as a cadet to assist the museum's Honorary Conchologist, Sir Joseph Verco. In 1928 he was appointed Assistant Conchologist and in 1934 became Curator of Molluscs. He retired from the museum in 1962 because of ill health. He died in 1966 Fellow of the Royal Society of South Australia (1929) Australian Natural History Medallion (1950) Honorary Life Member, Field Naturalists' Society of South Australia (1964) Foundation Patron of the Malacological Society of Australia Fellow and Honorary Life Member of the Royal Zoological Society of New South Wales’ (Shellers from the Past and the Present). (17 works in 11 volumes).