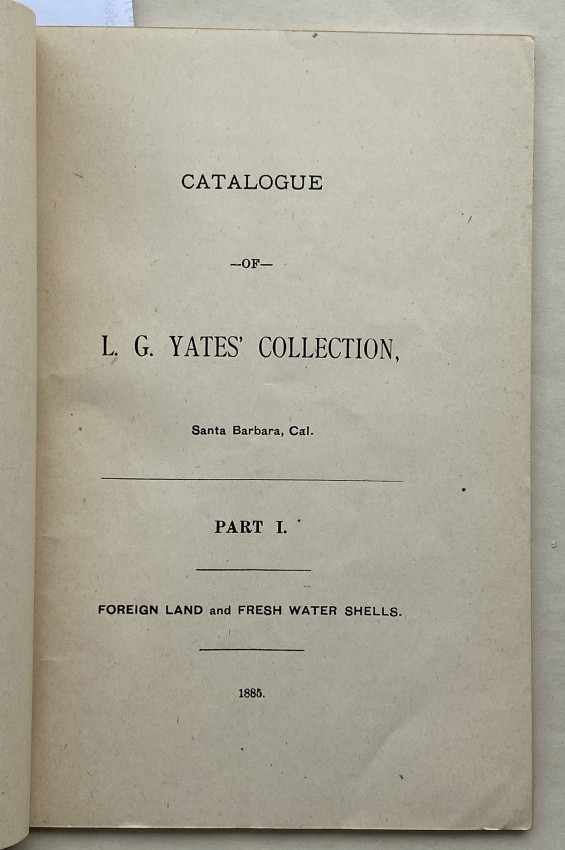 Presentation copy of the catalogue of part of the shell collection of paleontologist, dentist, orchid enthusiast and conchologist: L.G. Yates ‘that strange and precocious English lad … who became an almost omnipotent naturalist’ (Charles L. Camp).

Lorenzo Gordin Yates “was born January 12, 1837 on the Isle of Sheppey at the mouth of the Thames River. He collected fossils, created mechanical toys, exhibited a precocious imagination, and displayed a passion for learning about the living world as a young boy.

Dr. Yates attended private schools and then sailed to New York at the age of 14. He studied medicine and dentistry as an apprentice and gained knowledge of chemistry and mineralogy. He studied birds and learned taxidermy. He began practicing dentistry in Wisconsin in 1861 and married Eunice Amelia Lake. The couple came to California in 1864 and settled at Centerville.

Dr. Yates had a regular dental practice at Centerville, but he spent much of his time searching for fossils from the valley floor to the top of Mission Peak. He discovered horse and elephant remains in the Irvington gravels and search here several times from 1867 to 1876 in company with Charles Allen and Emery Munyan. … in 1871 … Yates had found a tusk and jaw of a mastodon near Mission San Jose. The jaw was 24 inches long and one of the finest every found in California … Yates found fossils embedded in gravel there 40 feet below the surface where he had already found horse and elephant fossils. He sold his entire fossil collection to Wabash College in 1872. …Dr. Yates was attracted to the Native American middens or shell mounds …, so he began to excavate and map a number of the sites. …

Shells became one of Dr. Yates’s chief interest and a lifetime pursuit. His collection eventually was said to number 50,000 catalogued specimens of land, fresh water, marine and fossil shells. He described two new species of fossil … shells from Alameda Creek. Two years before his death he was finally honored by having a fossil shell named after him.” (https://cnhm.msnucleus.org › information › yates).

Delafield - Report on the Art of War in Europe