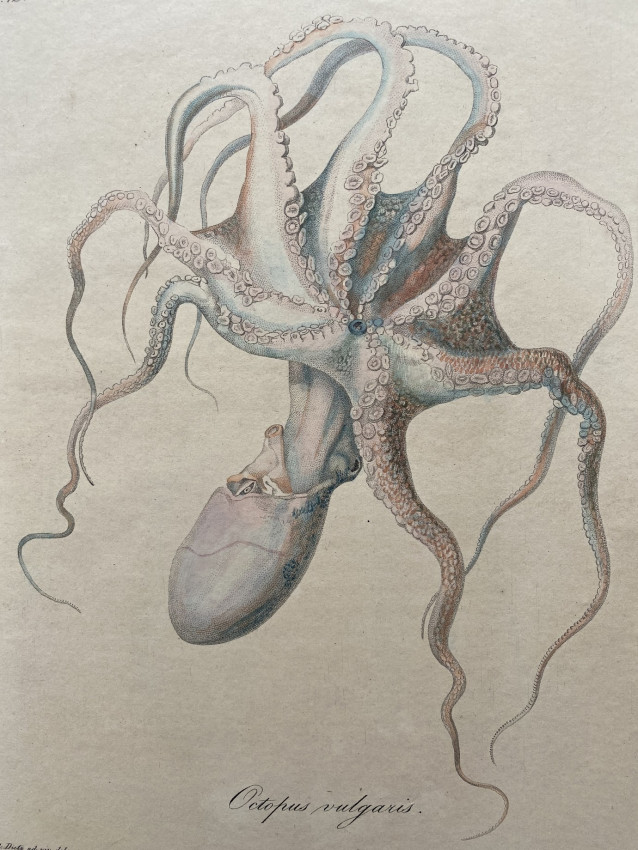 towards the end Carus examines the color changes of the squid and refers to Goethe’s essay “Entopische Aufsatz”. The fine plates are from one of the artists who agreed to teach Carus to draw and paint

An extract, included in volume 12 of the ‘Nova acta Academia Caesarea Leopoldino-Carolina’ published in 1825 – towards the end Carus examines the color changes of the squid and refers to Goethe’s essay “Entopische Aufsatz”. The fine plates are from one of the artists who agreed to teach Carus to draw and paint (see below).

Carus ‘was a German physiologist and painter, born in Leipzig, who played various roles during the Romantic era. A friend of Johann Wolfgang von Goethe, he was a many-sided man: a doctor, a naturalist, a scientist, a psychologist, and a landscape painter. … In 1811 he graduated as a doctor of medicine and a doctor of philosophy. In 1814 he was appointed professor of obstetrics and director of the maternity clinic at the teaching institution for medicine and surgery in Dresden. He wrote on art theory. From 1814 to 1817 he taught himself oil painting working under Caspar David Friedrich… He had already taken drawing lessons from Julius Dietz [the artist responsible for the images in the present work] and subsequently studied under Julius Schnorr von Carolsfeld at the Oeser drawing academy. When the King of Saxony, Frederick Augustus II, made an informal tour of Britain in 1844, Carus accompanied him as his personal physician. It was not a state visit, but the King, with Carus, was the guest of Queen Victoria and Prince Albert at Windsor Castle, and Carus was able to visit many of the sights in London and the university cities of Oxford and Cambridge, and meet others active in the field of scientific discoveries. They toured widely in England, Wales and Scotland, and afterwards Carus published, on the basis of his journal, The King of Saxony's Journey through England and Scotland, 1844. He is best known to scientists for originating the concept of the vertebrate archetype, a seminal idea in the development of Darwin's theory of evolution. In 1836, he was elected a foreign member of the Royal Swedish Academy of Sciences. Carus is also noted for Psyche (1846). Carl Jung credited Carus with pointing to the unconscious as the essential basis of the psyche. Although various philosophers, among them Leibniz, Kant, and Schelling, had already pointed very clearly to the problem of the dark side of the psyche, it was a physician who felt impelled, from his scientific and medical experience, to point to the unconscious as the essential basis of the psyche. This was C. G. Carus, the authority whom Eduard von Hartmann followed. (Jung [1959] 1969, par. 259) Carus died in Dresden. He is buried in the Trinitatis-Friedhof (Trinitatis Cemetery) east of the city centre.’ (Shellers from the Past and Present).

1798 ILLUMINATI Masons Proofs of a Conspiracy