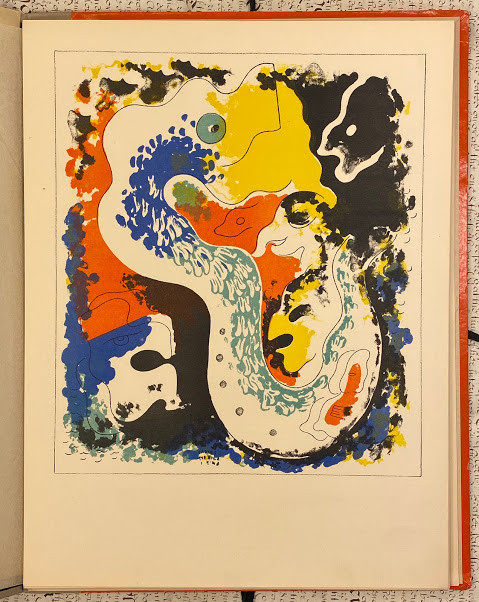 European and Latin-American artistic fusion: number 762 of 1,000 copies, signed by Mérida. This is the artist’s printed ‘magnum opus’

Number 762 of 1,000 copies, signed by Mérida: the artist’s printed ‘magnum opus’.  The two-page introduction explains that the Popol-Vuh provides the Mayan Quiché account of the gods, the creation of the universe, and the mythological history of their civilization. The text use here is taken from the 16th-century manuscript in Quiché and Latin. Mérida, who was born in Guatemala in 1891 and died in Mexico in 1984, was proud of his Mayan ancestry as the present work attests. He focuses in the present work on two characters in  the Popol-Vuh: Hunahpu and Xbalanque . The artist’s intention was present a visual interpretation of the selected passages, all the while ensuring that the spirit and poetry of the original source was retained.

"Carlos Mérida (December 2, 1891 – December 21, 1985) was a Guatemalan artist who was one of the first to fuse European modern painting to Latin American themes, especially those related to Guatemala and Mexico. He was part of the Mexican muralism movement in subject matter but less so in style, favoring a non-figurative and later geometric style rather than a figurative, narrative style. Mérida is best known for canvas and mural work, the latter including elements such as glass and ceramic mosaic on major constructions in the 1950s and 1960s. One of his major works, 4000m2 on the Benito Juarez housing complex, was completely destroyed with the 1985 Mexico City earthquake, but a monument to it exists at another complex in the south of the city." (wikipedia)