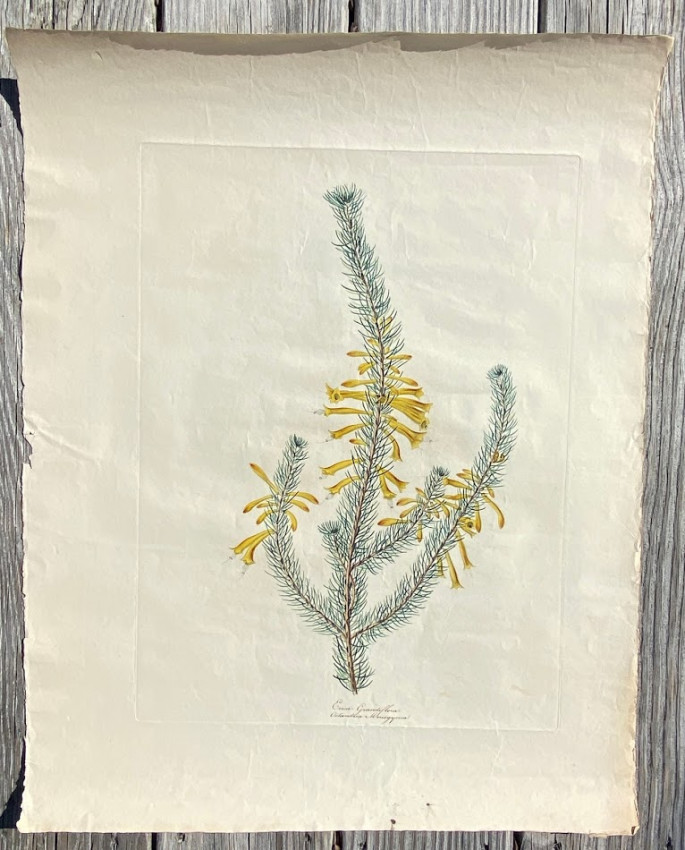 Exotic Plants from The Royal Gardens at Kew.

Exotic Plants from The Royal Gardens at Kew. Two Numbers to be Published Annually, at Sixteen Shillings each, the Coloured, and Twelve Shillings the uncoloured. To be had at Mrs. Darling’s … Mr. White’s … Mr. Foldath’s … and No 4, King-Street, Portman-Square.[London: 1790]. Large folio (approx. 24 x 19in; 610 x 493mm). Letterpress title sheet to ‘Number II’ (only) on laid paper, and 3 etched and hand-coloured plates only (of 8) on Whatman wove paper. Uncut and unbound.

Provenance: contemporary note on title “A Lady / by Lady Dynevor’s desire” (Cecil de Cardonnel, 2nd Baroness Dynevor, 1735 – 1793, was a Welsh Peer and the daughter of the 1st Earl Talbot).

A significant and very beautiful fragment from one of the rarest of all 18th-century illustrated flower books: including an image of a critically endangered Erica, a South African native.

The work was not a success and no more than two parts, with a total of 8 plates, were ever published. The auction records show a single plate being offered for sale in 2009, whilst the last time all eight plates were offered was at Sotheby’s in 1948.

The plates to the first part incorporated an engraved publication line, together with two engraved lines identifying the subject of the plate by its bi-nomial, whilst also listing its class and order. In the second part, the plates are without an engraved publication line, and the two-line identifier is in manuscript.The plates present here include one from the first part: 1. Plumbago Rosea; and two from the second part 2. Fuchsia Coccinea; 3. Erica Grandiflora.

The Plumbago is native to Southeast Asia, Indonesia, the Philippines, and Yunnan in southern China.The Fuchsia is from South America. The Erica is from the Western Cape, South Africa: this image is particularly interesting as it appears to be a image of Erica grandiflora subsp. Perfoliosa, which is only found in the in the Jonkershoek Valley, and is considered to be ‘critically endangered’

“Margaret Meen, née Coleman (died 1824) …. was born in Bungay, Suffolk but moved to London to teach drawing flowers and insects.  She showed her work as a botanist at the Royal Academy and the Royal Watercolour Society and published “Exotic plants from the Royal Gardens at Kew” in 1790 which is dedicated to Queen Charlotte. Her collection is now part of the Kew Herbarium.” (Wikipedia).