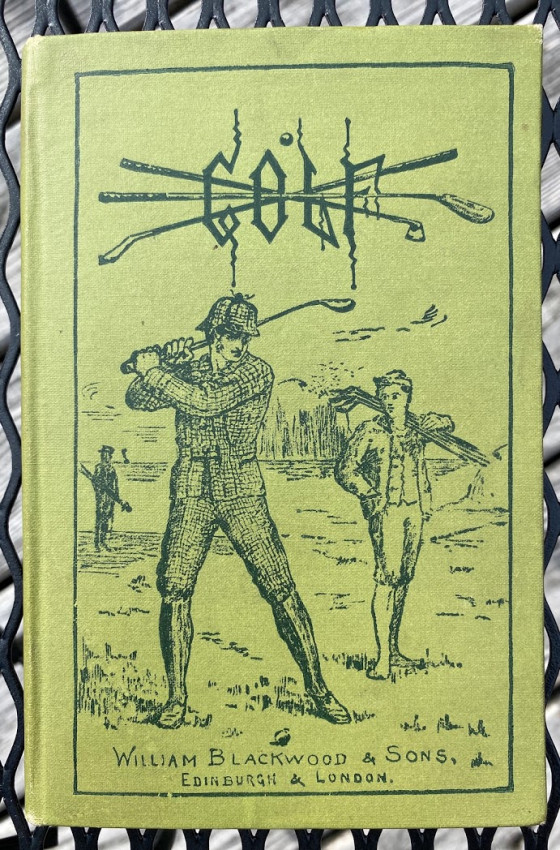 Hints on the Game of Golf

Hints on the Game of Golf. Edinburgh & London: William Blackwood & Sons, 1886. 12mo (6 ¾ x 4 3/8in; 172 x 111mm).  Pp.[i-viii; 1-]69[-72], including 2pp. publisher’s ads. at the front and 3 blank pages at the back. (Light spotting to edges of book-block [see image]). Original light green cloth, the upper cover blocked in dark green with a decorative title design incorporating a golfer and a caddy, the spine lettered in dark green, brown glazed endpapers (very light scuffing to the lettering on the spine [see image]).

The best available copy of an important and quite rare work:  the first edition of Hutchinson's first book, and one of the first ever books of golf instruction, in fact, Murdoch claims that this was the impetus for all other books of instruction in the game.  This lively, funny, informative and well-written work should form a cornerstone of any collection sporting books, not just golfing books. It has been suggested that the publisher, William Blackwood (a friend of the author) limited the print run of this first edition to around 1000 copies: it proved so successful that, over the next twenty years, no less than 14 editions were published.

In addition to numerous book on other subjects, Hutchinson went on to write more than a dozen golfing books as well as many articles on golf.

Horace Hutchinson “was an English amateur golfer who played in the late 19th century and early 20th century. Hutchinson won the 1886 Amateur Championship and the 1887 Amateur Championship. He had three top-10 finishes in the Open Championship, his best result being sixth in the 1890 Open Championship. He was also a prolific writer of books on the subject of golf and other sporting themes. Hutchinson was the first English captain of the R&A links at St Andrews Golf Club, Scotland. … Hutchinson, born 16 May 1859 in London, England, was the third son of General William Nelson Hutchinson (1803–1895). He began his golfing career at an early age playing at the Royal North Devon golf club—also known as Westward Ho!—a course founded in 1864 and designed by Old Tom Morris. By the age of sixteen he won the club medal championship. He attended Corpus Christi College for a time where he was a cricket player, then Oxford University from 1878–81 where he made an immediate impression by playing number one on the Oxford golf team and led them to victory over arch rival Cambridge in the University Golf Match.

During his Oxford years he would spend vacations at home playing the Royal North Devon course accompanied by a young orphaned caddie who was employed by the Hutchinson family as a houseboy. The young lad went by the name of John Henry Taylor. Taylor's future exploits in golf—which included winning five Open Championships—would become legendary.

Hutchinson was a keen billiards player and enjoyed rowing, shooting and angling. He graduated Oxford BA with third-class honours in literae humaniores (1881) and entered the Inner Temple with a view to reading for the bar, but his health, always frail, temporarily broke down. In 1890 he considered becoming a sculptor and studied briefly under G. F. Watts. In 1893 he married Dorothy Margaret Chapman, daughter of Major Frederick Barclay Chapman of the 14th Hussars. Hutchinson's major accomplishments in golf were his two victories in the 1886 and 1887 Amateur Championships. He became the first player to successfully defend the title by defeating the great John Ball on Ball's home course at Royal Liverpool Golf Club in Hoylake.

Hutchinson was an avid student—and later teacher—of the mechanics of the golf swing, so he decided to put forth in writing his suggestions on methods of play. He said, among other things, "The great secret of all strokes played for the most part is to make the club travel as long as possible in the direction in which you want the ball to go".

In 1896, showing his humorous side on the subject of golf etiquette, Hutchinson remarked:If your adversary is badly bunkered, there is no rule against your standing over him counting his strokes aloud, with increasing gusto as their number mounts up, but it will be a wise precaution to arm yourself with the niblick before doing so, so as to meet him on equal terms. (Horace Hutchinson)

.…. American golf teaching professional Mike Stevens said of Hutchinson, "In my mind, there is no question that Horace Hutchinson was a teacher extraordinaire and is clearly the father of golf instruction".

Walter Travis, in 1904—shortly after his victories in the 1903 U.S. Amateur and 1904 British Amateur—said of Hutchinson:All things considered, the golfer whom I most admired as a player was Horace Hutchinson. Over here we have read so many of his books and spoken of him so long as a veteran that one is surprised to find he is only forty-seven years old. He plays every shot for what it is worth and in perfect style, as free as any supple youth, and, all told, I pronounce him, to my mind, the ideal golfer. ” (wikipedia).