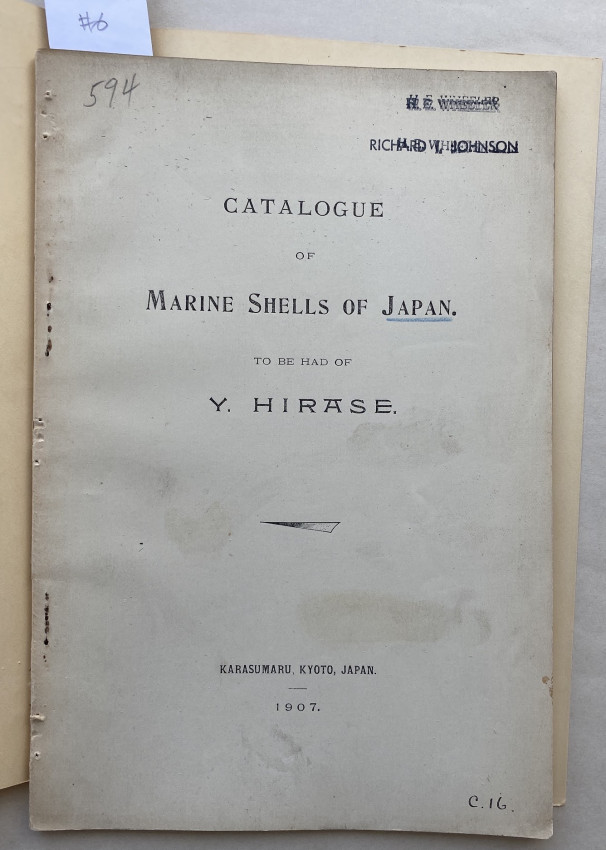 [JAPAN: three catalogues of Japanese land and marine shells, for sale from Hirase]

Three catalogues: two from the library of Dr. Wheeler, one from Prof. Jacot.

Three catalogues from this important figure in the history of malacology in Japan – two from the library of Dr. Wheeler, one from Prof. Jacot.

Yoichiro Hirase ‘was a Japanese malacologist and business man. … Yoichiro greatly contributed to the start of malacology in Japan and was responsible for the collection and indirectly the naming of many land and marine mollusks. Revered by malacologists throughout the world for his enthusiasm and contributions to malacology, he has numerous species named after him. …. He was a wealthy Kyoto dealer in poultry, seeds, and aviculture products who… founded a side business trading in marine and land shells. He began to collect shells in 1898 at age 39. Over the next 20 years, his collection grew to about 3,000 Japanese specimens and 4,500 foreign specimens. He coordinated numerous field collectors to explore the territories and prefectures of Japan gathering both land and marine mollusks. Many of the species found by his team were newly discovered and named in collaboration with many scientists around the world, including H.A. Pilsbry, P. Ehrmann, G.K. Gude, C.F. Ancey, and G.B. Sowerby. Yoichirō was the mentor of Tokubei Kuroda, another forefather of Japanese malacology. Kuroda got his start in malacology under the employ of Yoichiro at age 15. …. A rapid learner and diligent clerk, Kuroda was soon placed in charge of the shell business, and became Hirase's secretary. He was instrumental in the founding and operation of Hirase's Conchological Museum (1913-1919), which was situated near the Kyōto Zoo, and handled most of Hirase's correspondence with foreign researchers. He also helped compile and edit Hirase's Conchological Magazine (1907-1915). Hirase’s Conchological museum housed his collection from 1913 until 1919. The museum was compelled to close in 1919 due to his illness and the financial panic brought about by World War I. At its largest, the Hirase collection grew to 15,000 pieces.‘ (Shellers from the Past and the Present). (3)