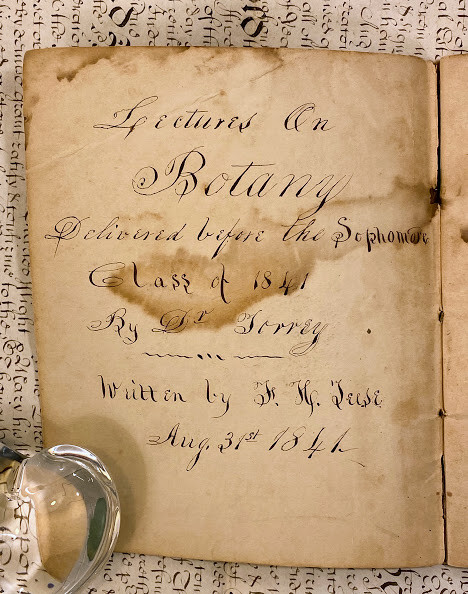 Manuscript notebook containing ‘Lectures On Botany Delivered before the Sophomore Class of 1841 By Dr. Torrey.

Teese’s notes on Torrey’s Princeton course of 14 lectures (the 10th and 11th lectures end with inserted notes by Teese “The first part … is omitted”,  and “This is a very dry lecture and there is scarcely any thing to be written on it”.

Torrey “was an American botanist, chemist, and physician. Throughout much of his career, Torrey was a teacher of chemistry, often at multiple universities, while at the same time pursuing botanical work. Dr. Torrey's botanical career focused on the flora of North America. His most renowned works include studies of the New York flora, the Mexican Boundary, the Pacific railroad surveys, as well as the uncompleted Flora of North America.

Torrey was born in New York City, the second child of Capt. William and Margaret (née Nichols) Torrey….  when he was 15 or 16 years of age his father received an appointment to the state prison at Greenwich Village, New York, where he was tutored by Amos Eaton, then a prisoner and later a pioneer of natural history studies in America. He thus learned the elements of botany, as well as something of mineralogy and chemistry. In 1815 he began the study of medicine with Wright Post, qualifying in 1818. He opened an office in New York City, and engaged in the practice of medicine, at the same time devoting his leisure to botany and other scientific pursuits

In 1817, he became one of the founders of the New York Lyceum of Natural History (now the New York Academy of Science), and one of his first contributions to this body was his Catalogue of Plants growing spontaneously within Thirty Miles of the City of New York (Albany, 1819). Its publication gained for him the recognition of foreign and native botanists. In 1824 he issued the only volume of his Flora of the Northern and Middle States. This used John Lindley's system of classifying flora, a way of classifying that was not commonly used in the United States.

In 1836 he was appointed botanist to the state of New York and produced his Flora of that state in 1843; while from 1838 to 1843 he carried on the publication of the earlier portions of Flora of North America, with the assistance of his pupil, Asa Gray. From 1853 he was chief assayer to the United States assay office in New York City when that office was established, but he continued to take an interest in botanical teaching until his death. He was frequently consulted by the treasury department on matters pertaining to the coinage and currency, and was sent on special missions at various times to visit the different mints. He was elected an Associate Fellow of the American Academy of Arts and Sciences in 1856.” (Wikipedia)

Fred. H. Teese “a Representative from New Jersey; born in Newark, N.J., October 21, 1823; was graduated from Princeton College in 1843; studied law; was admitted to the bar in 1846 and commenced practice in Newark, N.J.; member of the State house of assembly in 1860 and 1861, serving as speaker in 1861; presiding judge of the court of common pleas of Essex County from 1864 until his resignation in 1872; elected as a Democrat to the Forty-fourth Congress (March 4, 1875-March 3, 1877); declined the nomination for reelection in 1876 to the Forty-fifth Congress; resumed the practice of law; died in New York City January 7, 1894; interment in Mount Pleasant Cemetery, Newark, N.J.” (http://bioguide.congress.gov/scripts/biodisplay.pl?index=T000111).