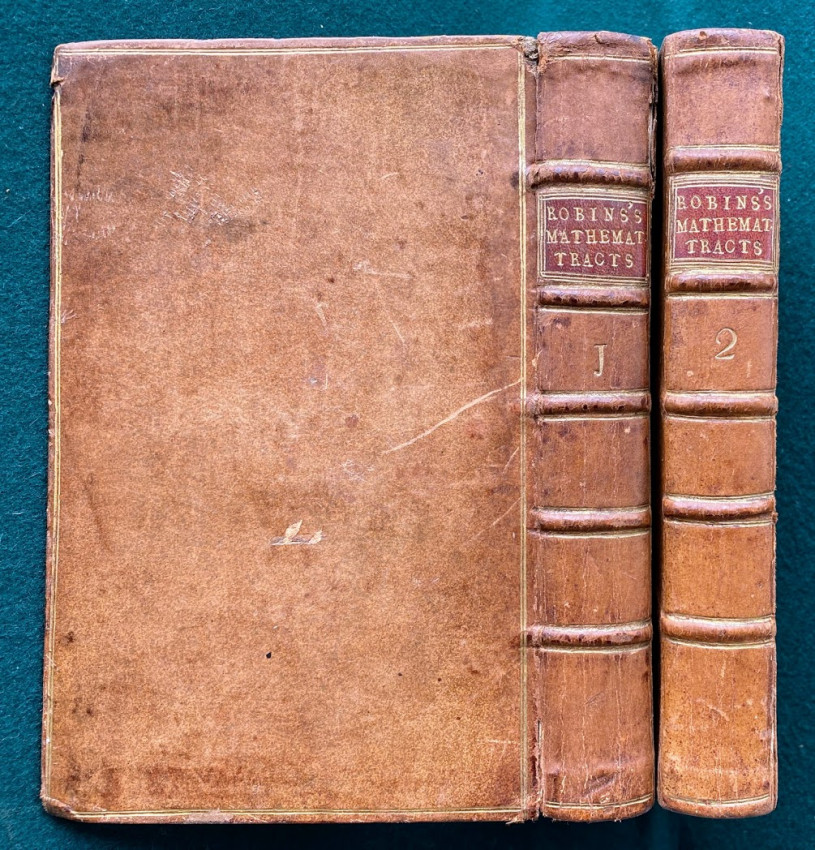 Mathematical Tracts. Vol. I containing his New Principles of Gunnery ... .Vol. II. ... his Discourse on the Methods of Fluxions

A posthumous work by a cheerleader for Sir Isaac Newton, from the libary of a friend and supporter of Benjamin Franklin

First edition, the Cottesloe Military Library copy, a fine set: bookplate of Earl Stanhope, FRS and friend of Benjamin Franklin. This collection contains Robins' book on gunnery, the polemics on the vis viva controversy, other articles read to the Royal Society but until then unpublished, reprints of the published articles, and James Wilson's personal comments on the life and character of his old friend. Robins (1707-51), "is best known as the inventor of the ballistic pendulum. Today the device is used to demonstrate conservation of momentum as well as for the purpose to which Robins put it: to determine the muzzle velocity of bullets ... Much of his writing was devoted to attacks on Newton's enemies - Leibniz, the Bernoullis, Berkeley and James Jurin. Robins took part in the celebrated vis viva controversy, the subject of most of his polemics ... His other work on ballistics was far from trivial, including studies of the resistance of fluid media to high-speed objects, pressures on projectiles inside a gun barrel, the rifling of barrel pieces, and the shape of actual, as opposed to ideal, trajectories." (D.S.B., XI, pp. 493-94).

Provenance: Philip Stanhope, 2nd Earl Stanhope FRS (1714 – 1786, armorial bookplate). ‘The son of James Stanhope, 1st Earl Stanhope and Lucy Pitt, he succeeded to his father's titles in 1721. He was a Fellow of the Royal Society from 1735, and had a lifelong interest in mathematics. ‘ (Wikipedia). Stanhope ‘had assisted ..[Benjamin Franklin] in his attempts to obtain an acceptable political settlement for the Colonies … and Franklin became a firm friend of the Stanhope family’ (F.M. Beatty ‘The Scientific work of the third Earl Stanhope’)

Thomas Francis Fremantle, 2nd Baron Cottesloe (1830-1918, armorial bookplate).  ‘The Cottesloe Military Library is probably the most extensive private collection of early printed books focused on military matters. Carefully assembled by the third Lord Cottesloe, Thomas Fremantle, the library includes works on all aspects of military theory and practice from the earliest printed books to the age of Napoleon. …This comprehensive collection contains works on weaponry, training, architecture, engineering (including a first edition of Galileo’s final treatise on the strength of materials), pyrotechnics, ballistics, archery, chivalry, and the English Civil War.’ (Sothebys).