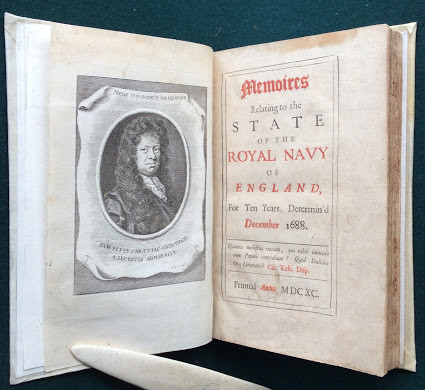 Memoires relating to the State of the Royal Navy of England, for Ten Years, Determin'd December 1688.

First Edition, first issue on fine paper with the truncated imprint "Printed Anno MDCXC". This is Pepys' only major life-time publication. In it he ably justifies his role as Secretary to the Navy Board, something that was necessary because his former support for the deposed King James II had left him politically compromised.

In place of the usual frontispiece, this copy includes an example of the Kneller/White portrait of Pepys as it was used as Pepys’ bookplate. It is interesting to note that there are a number of books in the Pepys library in Cambridge in which Pepys used the 'frontispiece' in place of his usual bookplate: "In the Pepys Library, almost all 3000 volumes have a portrait bookplate in, either one which looks like [the present] ... example or one which is the same as the frontispiece for his 'memoires'" (email exchange with Pepys Library, Cambridge).

Also included here is  a letter signed, dated 8th March 1672,  from Sir Thomas Chicheley (1614-1699, Master-General of the Ordnance) to David Walker, Lieutenant General of 'His Ma[jes]t[i]e[s] Ordnance', concerning orders that the "Deptford Ketch" should "be supplied with Gunnry. Stores needful for her and also ye Katherine & Hopewell ffire [sic] shippes wth. Ordnance Stores & ffire works necessary for them respectyvely ... to be delyvered into ye custody ye respectyve Mast[er] Gunners of the said Shippes...". This letter is dated just before Sir Robert Homes attack on the Dutch fleet (23rd March 1672), an action which marked the start of the third Anglo-Dutch War.

The letter,  was sent by Chicheley from 'My House in Bloomsbury'. Pepys, after a visit to Chicheley's house in Great Queen Street on 11 Mar. 1668, wrote admiringly: "A very fine house, and a man that lives in mighty great fashion, with all things in a most extraordinary manner noble and rich about him, and eats in the French fashion all; and mighty nobly served with his servants, and very civil, that I was mighty pleased with it; and good discourse."

Traditionally it has been assumed that the first issue, fine paper copies of this book were intended for presentation, but no author-inscribed copies have been found. In the second issue the title has the fuller imprint and reads "London: Printed for Ben. Griffin, and are to be sold by Sam. Keble, 1690". The 'ex libris' portrait is a bit of an unknown quantity: the thin laid paper looks to be of the right vintage, and the size appears to be 'correct' (i.e. it was printed from the original plate) but I do not know enough about Pepys bookplate to be able to guarantee it. The letter is guaranteed.Wing P1449; cf. Pforzheimer 793;  ESTC R13464.