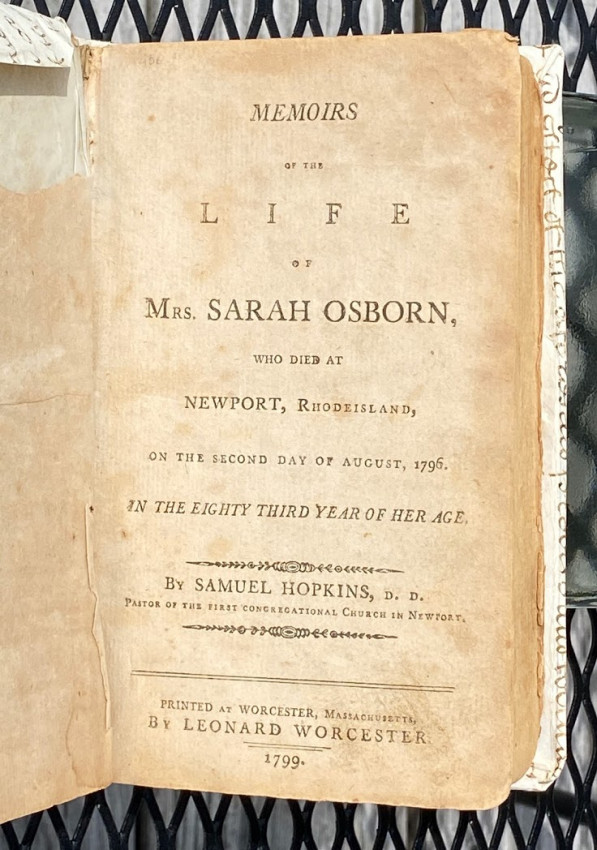 Memoirs of the Life of Mrs. Sarah Osborn, Who Died at Newport, Rhode island, on the Second Day of August, 1796.

Rare on the market: the biographical/autobiographical account of “one of the most charismatic female religious leaders of her time”: the time of the first ‘Great Awakening’. The last copy of this book listed as having sold at auction was in 1959.

Sarah Osborn’s writings (diary, 1744--1768; self-analysis, prayers, religious reading, etc.) offer insight into the “rising evangelical movement in eighteenth-century America [from the point of view of one of the leaders]. A schoolteacher in Rhode Island, a wife, and a mother, Sarah Osborn led a remarkable revival in the 1760s that brought hundreds of people, including many slaves, to her house each week. Her extensive written record—encompassing issues ranging from the desire to be "born again" to a suspicion of capitalism—provides a unique vantage point from which to view the emergence of evangelicalism.” (preamble to Catherine A. Brekus’s “Sarah Osborn’s World: the rise of Evangelical Christianity in Early America” (2017).