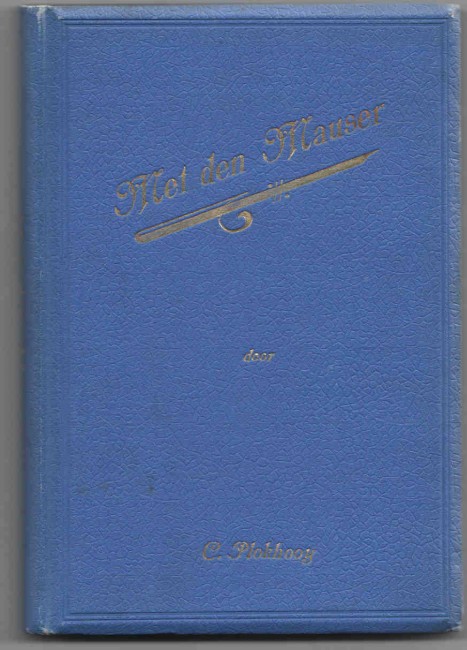 Email or share
Crown 8vo; original textured blue cloth over bevelled boards, with decorative gilt lettering to spine and upper cover; pp. (iv) + 151; frontis. portrait. Light wear to extremities; regular browning; some moderate foxing. Very good condition. Dutch text. (Mendelssohn II, p. 171) Uncommon. An attractive copy. \"Having completed his teacher training in the Netherlands,\" Cornelis Plokhooy (1877-1964) \"arrived in the Transvaal Republic in 1897 ... From 1897 to 1899 he taught at the Oost-Eind School in Pretoria .. On the outbreak of the Second Anglo-Boer War (1899-1902) he enlisted in the Hollanderkorps under Comdt J.P. la Grange Lombard, took part at the battle of Elandslaagte (21.10.1899), and subsequently in military operations in Natal and the Orange Free State. He was captured by the enemy during the battle at Donkerhoek (12.6.1900) and sent back to his mother country as a persona non grata. The first of several couriers sent out on secret missions by Dr W.J. Leyds, he left for Lourenço Marques (Maputo) on 31.12.1900, but while suffering from malaria was arrested in Mozambique before completing his mission. On board the Zaire and together with other Boer prisoners of war, he was sent to Portugal where he was interned in the camp at Caldas da Rainha. However, he managed to escape, and returned to the Netherlands via Lisbon, Genoa, and Trieste. His book Met den mauser: persoonlijke ervaringen in den Zuid-Afrikaansche Oorlog, in which his experiences during the war were recorded, was published in 1901.\" - DSAB IV, p. 465.