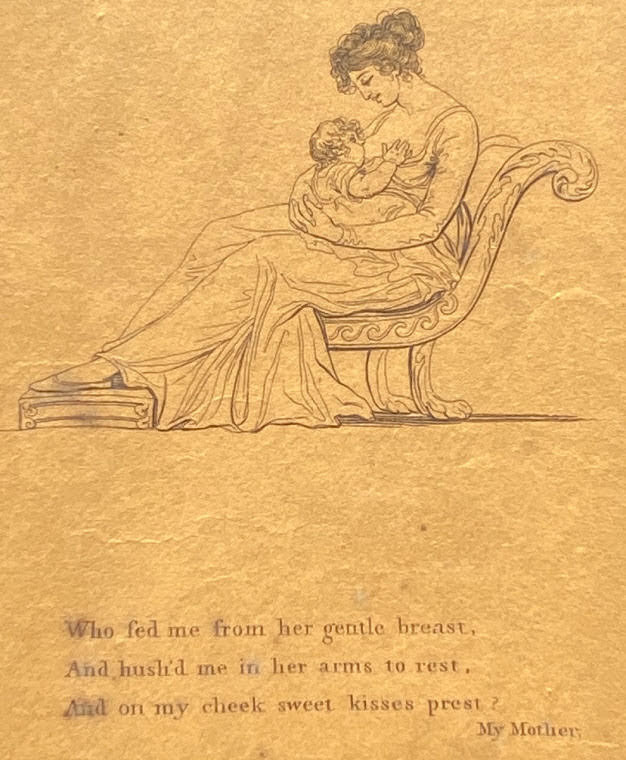 My Mother a Poem Embellished with Designs. By a Lady. Engraved by P.W. Tomkins. Engraver to Her Majesty.

'The first edition of "My Mother" is a notable rarity, missing from many famous collections.' (Cotsen Children's Library).

My Mother a Poem Embellished with Designs. By a Lady. Engraved by P.W. Tomkins. Engraver to Her Majesty. London: published by P.W. Tomkins, [1807, occasional watermark: 'Cobb's Patent' or '18(??)' or (18)04']. Small quarto (9 x 7in; 230 x 178mm.). Engraved throughout: title + 9 leaves, on ‘tobacco’ tinted wove paper. Unbound. Condition: see images, some soiling to recto of title and verso of final leaf, occasional light spotting, small marginal tears; without the wrappers present on the Lilly Library and Opie copies.

'The first edition of "My Mother" is a notable rarity, missing from many famous collections. No other copies are listed as having sold at auction. Stewart locates only two copies (British Library and Toronto). There was no copy in Percy Muir's National Book League exhibition of 1946, although the autograph manuscript and original pencil drawings were on display (no. 457). Subsequently Edgar Oppenheimer acquired the manuscript, but never found a copy of the printed book (sale, 1974-82). The Opies had only later editions in their exhibition at the National Book League in 1973, although they acquired a copy in time for the addenda to the published catalogue (second edition, no. 732a).

First illustrated edition of one of the best-loved poems of the century, 'a sentimental bond between parents and children for the next sixty or seventy years' (Iona and Peter Opie), endlessly reprinted in formats ranging from penny chapbooks to lavishly illustrated gifts for Victorians. The text itself had first appeared in Ann and Jane Taylor's first book, "Original Poems, for Infant Minds", 1804.

The engraver and publisher, Peltro William Tomkins (1759-1840), was a pupil of Bartolozzi and drawing master to the daughters of George III. He engraved plates from his own designs as well as from the drawings of others, so "My Mother" may have been entirely his own work. There are, however, obvious affinities in pose and gesture between these illustrations and some other engraved books of the period, for example two gift books which Tomkins published in the 1790s from drawings by Lady Templeton, and Friedrich Rehberg's "Drawings" of Lady Hamilton's àttitudes'. Indeed because of a certain physical resemblance between the Mother and Lady Hamilton, it has been suggested more than once that she was the model. Apart from Tomkins, the author's brother Isaac Taylor, junior, has been suggested as the artist; but this is very doubtful because a suite of his drawings for the poem survives, and is wholly different in character.' (Special Collections - Cotsen Children's Library, Princeton).