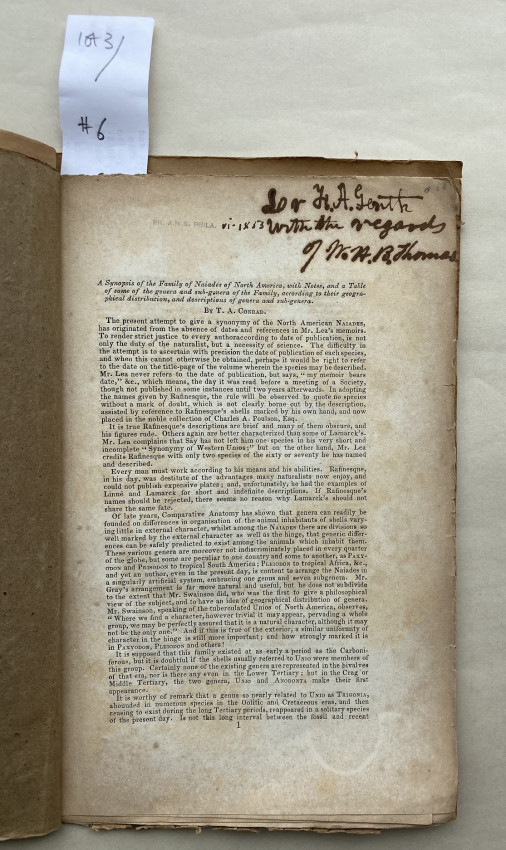 [NORTH AMERICA. -] A Synopsis of the Family of Naïades of North America,

an off-print from ‘Proceedings of the Academy of Natural Sciences of Philadelphia’, vol.VI. pp.243-269 reset

[NORTH AMERICA. -] A Synopsis of the Family of Naïades of North America, with notes, and a table of some of the genera and sub-genera of the family, according to their geographical distribution, and descriptions of genera and sub-genera. [an off-print from ‘Proceedings of the Academy of Natural Sciences of Philadelphia’, vol.VI. pp.243-269 reset]. [Philadelphia: printed by Merrihew & Thompson, undated but with manuscript date ‘1853’]. Octavo (9 ½ x 6 1/4in; 242 x 158mm). Pp.[1-]2-27[-28]. (Some light spotting to first and last few leaves.) Stitched into early drab paper wrappers, stapled into drab paper outer wrappers. Provenance: Academy of Natural Sciences of Philadelphia (small discrete ink stamp to upper margin of first page ‘PR. A.N.S. PHILA’ with manuscript note ‘vi-1853’); Frederick Augustus Genth (presentation inscription ‘For F.A. Genth with the regards of W.A.B. Thomas’).

Very rare offprint with an appropriate provenance, the setting of the text is the same as is found in the Proceedings, but all the headlines (with the pagination and date) were reset.

Conrad “was from early life an investigator of American paleontology and natural history, devoting himself to the study of the shells of the Tertiary and Cretaceous formations, and to existing species of mollusks. In 1831 he began the issue of a work on “American Marine Conchology,” and the year following published the first number of his “Fossil Shells of the Tertiary Formation,” which was never completed. A “Monography of the Family Unionidae” was issued between 1835 and 1847. The lithographed plates in his publications were in part his own work. He contributed many articles to the American Journal of Science and the Journal of the Philadelphia Academy of Science. As one of the New York state geologists he prepared the geological report for 1837. He was paleontologist of the New York Geological Survey from 1838 until 1841, and wrote the annual reports in that department. He also made the reports of paleontological discoveries in the Pacific Railroad Survey and the Mexican Boundary Survey. He defended the theory of periodical refrigeration, and suggested that the Mississippi depression was the consequence of the upheaval of the Appalachians and the later elevation of the area of the Rocky Mountains. A list of his scientific papers is given in the catalogue of the Royal Society of England. The American Philosophical Society elected Conrad to Membership in 1865 for his contributions to science.” (wikipedia).

Two editions of 1st US work on birth control