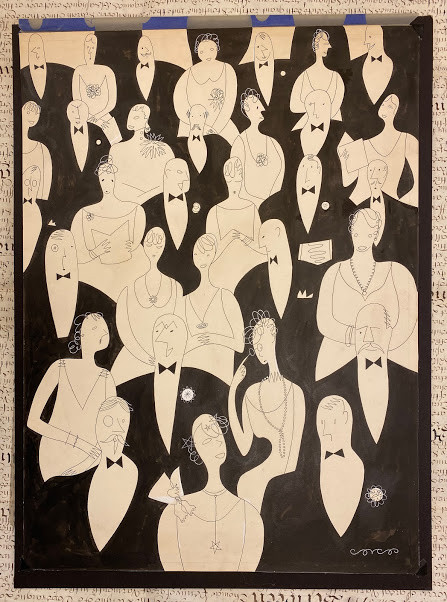 Original artwork, a section of a theatre audience viewed from the stage

A stylish and attractive work with a mid-century aesthetic.

‘Lucille Corcos was, for some thirty years, the doyenne of the “modern primitivist” trend on the American art scene. … Though Corcos paid little heed to conventions of scale and perspective, her work is far from abstract, and her renderings are painterly and nuanced.

…. Trained under Jean Matulka during the heyday of the Art Students League, Corcos began her professional career in 1929 with a move from Manhattan to Brooklyn Heights where she produced several illustrated children’s books, which editorial consensus deemed too sophisticated to publish. Frustrated, Corcos took the illustrations to the offices of Vanity Fair, where she received a cover commission on the spot. Her work subsequently became quite popular, and she illustrated a number of books for children as well as for adults. While their parents appreciated Corcos’s elegant and charming compositions, children, no doubt, were drawn in by her playful sense of line, and many of her books quickly became classics. One example is the Illustrated Treasury of Gilbert and Sullivan (1940), which she conceived, and which rivals Gilbert’s own Bab Ballads for its charming and sophisticated illustrations.

By the mid-1930s, Corcos was exhibiting widely, participating often in the Whitney Biennial; in the 1940s, her work was exhibited at the Metropolitan Museum of Art, the British Museum, the Art Institute of Chicago, the National Academy of Design, and many other museums. Later in life she exhibited at the Tel Aviv Museum of Art. She traveled extensively throughout Europe and South America and executed a significant public mural, which remains on view, in the Waldorf-Astoria in New York City.

Corcos was widely praised for her lack of self-consciousness and complete freedom of expression, for knowing the ropes of academic illusionism, yet rejecting it in her quest for spontaneity and freedom. Her ability to combine simplicity, intelligence, and creative flair in her work earned her a place with her contemporaries John Kane and Horace Pippin as an exemplar of a buoyant and playful, robust, nativist, unacademic tradition of naive art in America.’ (Marc Michael Epstein writing in the online ‘The Encyclopedia of Jewish Women’). 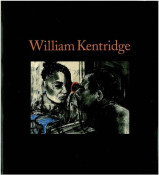 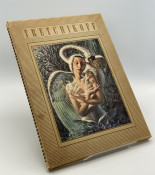