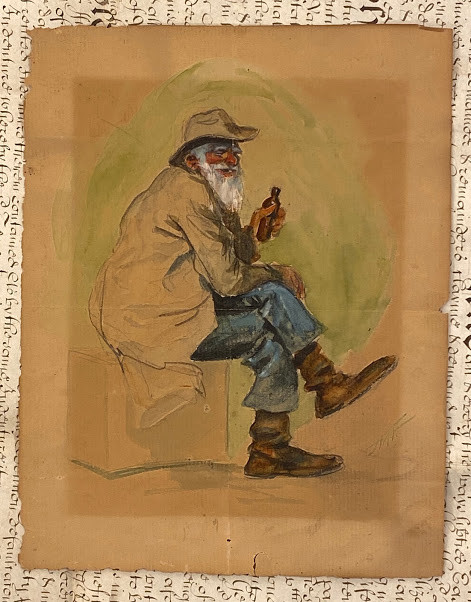 ‘James Montgomery Flagg (June 18, 1877 – May 27, 1960) was an American artist, comics artist and illustrator. He worked in media ranging from fine art painting to cartooning, but is best remembered for his political posters [“I Want YOU for U.S. Army”].

Flagg was born on June 18, 1877 in Pelham Manor, New York. He was enthusiastic about drawing from a young age, and had illustrations accepted by national magazines by the age of 12 years. By 14, he was a contributing artist for Life magazine, and the following year was on the staff of another magazine, Judge. From 1894 through 1898, he attended the Art Students League of New York. He studied fine art in London and Paris from 1898 to 1900, after which he returned to the United States, where he produced countless illustrations for books, magazine covers, political and humorous cartoons, advertising, and spot drawings. Among his creations was a comic strip that appeared regularly in Judge from 1903 until 1907, about a tramp character titled Nervy Nat.

In 1915, he accepted commissions from Calkins and Holden to create advertisements for Edison Photo and Adler Rochester Overcoats but only on the condition that his name would not be associated with the campaign. He created his most famous work in 1917, a poster to encourage recruitment in the United States Army during World War I. It showed Uncle Sam pointing at the viewer (inspired by a British recruitment poster showing Lord Kitchener in a similar pose) with the caption “I Want YOU for U.S. Army”. Flagg had first created the image for the July 6, 1916 cover of Frank Leslie's Illustrated Newspaper with the headline “What Are You Doing for Preparedness?” Over four million copies of the poster were printed during World War I, and it was revived for World War II. Flagg used his own face for that of Uncle Sam (adding age and the white goatee), he said later, simply to avoid the trouble of arranging for a model. President Franklin Delano Roosevelt praised his resourcefulness for using his own face as the model. By some accounts though, Flagg had a neighbor, Walter Botts, pose for the piece.

At his peak, Flagg was reported to have been the highest-paid magazine illustrator in America. He worked for the Saturday Evening Post and Collier's which were two of the most popular U.S. journals. In 1946, Flagg published his autobiography, Roses and Buckshot. Apart from his work as an illustrator, Flagg painted portraits which reveal the influence of John Singer Sargent. Flagg's sitters included Mark Twain and Ethel Barrymore; his portrait of Jack Dempsey now hangs in the Great Hall of the National Portrait Gallery. In 1948, he appeared in a Pabst Blue Ribbon magazine ad which featured the illustrator working at an easel in his New York studio with a young lady standing at his side and a tray with an open bottle of Pabst and two filled glasses sat before them. James Montgomery Flagg died on May 27, 1960, in New York City. He was interred at Woodlawn Cemetery in The Bronx, New York City.’ (Wikipedia)

The Souls of Black Folk, Essays and Sketches.