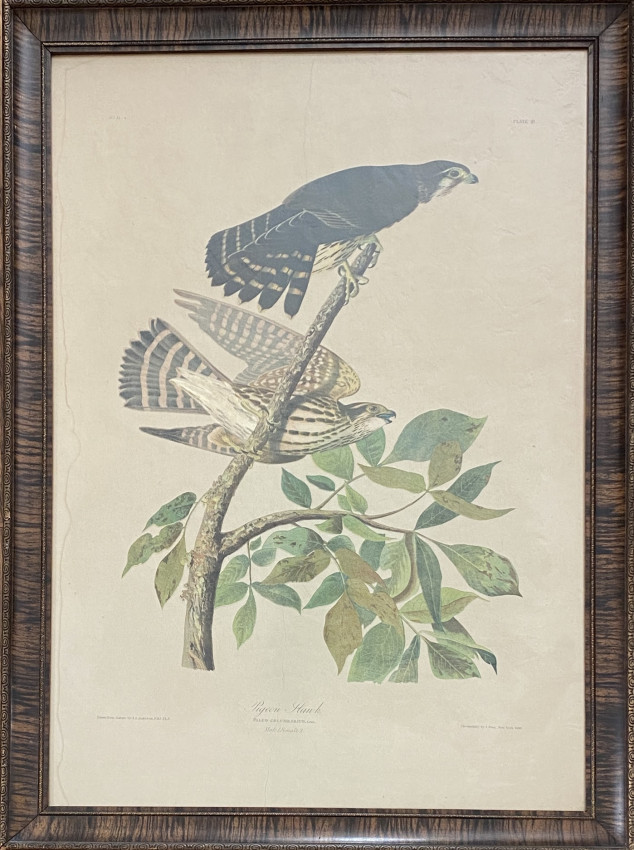 Condition: not examined out of the frame, but apparently: laid down, toned, long vertical splits, one up from the lower margin (10in) and one down from the upper margin (7 1/2in).

“Individual plates and original bound volumes of the Bien Edition are rarer, in terms of numbers, than the Havell Edition of Birds of America” (Ron Flynn).

‘In 1858 John James Audubon’s youngest son, John Woodhouse Audubon, undertook a new and ambitious business venture. The project was to be the first American full sized reissue of his father’s original (1826-38) Birds of America. The publication was to cost about half the price of the original Birds of America, and was also sold by subscription. The publication was to be issued in 44 separate parts. Each part would consist of seven sheets or pages, containing 10 images. Four of the sheets in each part contained one large or medium sized image, and three sheets in each part contained two smaller images.

With the advances in color printing, at the time, it was decided that the plates would be produced using the very latest techniques in chromolithography. The firm of Roe Lockwood and Son of New York was hired as publisher. Julius Bien of New York, a pioneer in chromolithography, was contracted as the lithographer. The name Bien Edition, of course, is a credit to Julius Bien. J.W. Audubon’s mother, Lucy Bakewell Audubon, co-signed some of the business agreements. J.W.’s older brother, Victor Gifford Audubon, was unable to offer much assistance to the project, as he was an invalid at the time and died in 1860. The undertaking had problems from the beginning. The Audubons were still trying to collect monies owed them from the octavo editions, payment receipts from new subscribers to the Bien Edition were slow in coming, and unscrupulous dealings of certain business partners resulted in the tenuous financial condition of the project. Finally, the Audubons were cutoff from their Southern subscribers at the onset of the Civil War, and this ended production of the Bien Edition. This huge financial catastrophe brought near financial ruin to the Audubon family, and certainly contributed to the death of J.W. Audubon in 1862. In 1863, Lucy Audubon had to sell family assets, including JJA’s original paintings for Birds of America, to keep the family solvent.

When production was stopped on the Bien Edition, only 15 parts had been issued. The 15 parts produced 105 sheets or pages, with a total of 150 images.... The Bien Edition consists of only one bound volume. It is not known exactly how many sets of the original 15 parts were printed. The consensus seems to be that between 75-100 sets were printed, and either bound into single volumes or left unbound. ...While individual plates and original bound volumes of the Bien Edition are rarer, in terms of numbers, than the Havell Edition of Birds of America, they do not bring near the prices that the Havells do.’ (Ron Flynn) http://www.auduboninfo.net/articles/BIEN%20ESSAY.htm

Audubon himself writes that “It is when the whole of the shores of our eastern rivers are swarming with myriads of Rice Buntings, Red-wings, Soras, and other migratory birds,—when all the sportsmen of those parts of our country are induced to turn out in the expectation of full bags of game, that the daring feats of the little spirited Falcon now before you are displayed.

Imagine yourself, good-natured reader, with a gun on your shoulder, following the windings of one of those noble streams which embellish our country and facilitate its commerce, having constantly within your view millions of birds on their way to the south, and which in the evenings fall thick as the drops of a hail-shower on the bordering marshes, to spend the night there in security, and by rest to restore the vigour necessary for their gaining the distant regions, whence half of them had emerged the preceding spring. Well, as you are proceeding, full of anxiety, and gazing in astonishment at the multitudes of feathered travellers, all of a sudden a larger bird attracts your eye. It sweeps along in the stillness of the autumnal evening with a rapidity seldom equalled, creating confusion, terror, and dismay along the whole shores. The flocks rise en masse with a fluttering sound which comes strangely on your ear, double and double again, turn and wind over the marsh, agitated and fearful of imminent danger. And now, closely crowded, they would fain escape, but alas! one has been singled out, and in the twinkling of an eye, the Pigeon Hawk, darting into the middle of the flock, seizes and carries him off. …

But, leaving you to your sport, I must follow the little marauder, as he makes toward the nearest shore, where he alights and devours his prey, and then, with unsatiated appetite, and bent on foul deeds, returns to the scene of action.”