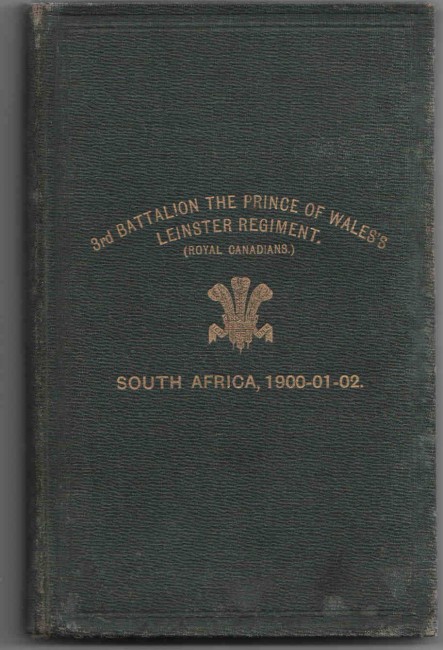 Email or share
Author\'s presentation inscription to front free endpaper. Demy 8vo; original green cloth, with lettering and regimental device in gilt to upper cover; pp. 148; plates; maps, incl. folding. Cloth somewhat mottled and rubbed; trace of damp-staining to fore-edge of boards, endpapers and frontis.; regular, light browning; some fox-spots. (Hackett, pp. 95, 166) \"The record of a militia battalion in South Africa based on regimental records, the author\'s campaign diary and other sources. The 3rd Leinsters arrived at East London in April 1900. They were first based at Queenstown in eastern Cape Colony before moving north to Stormberg where they were stationed for nine months. A detachment was posted to Aliwal North near the Orange Free State border. In late April 1901 the Leinsters regrouped at Stormberg and entrained for Kimberley where they stayed eight months primarily employed in blockhouse duties north and south of the town. A detachment joined the Kimberley Column, a local mounted force commanded by Col. Paris, and a company of Mounted Infantry was organized. The Column took part in convoy operations to Boshof in May 1900 and, in August of that year, was engaged by a Boer force at Wolvenkuil. In December the regiment was ordered to Modder River to reinforce the garrison. To the conclusion of active service, in April 1902, the 3rd Batt. engaged in blockhouse duties between Spytfontein and Honeynestkloof. Appendices include extracts from the author\'s diary, an account of the battle of Stormberg and notes on the early history of the Regiment.\" - Hackett: South African War Books, p. 95.