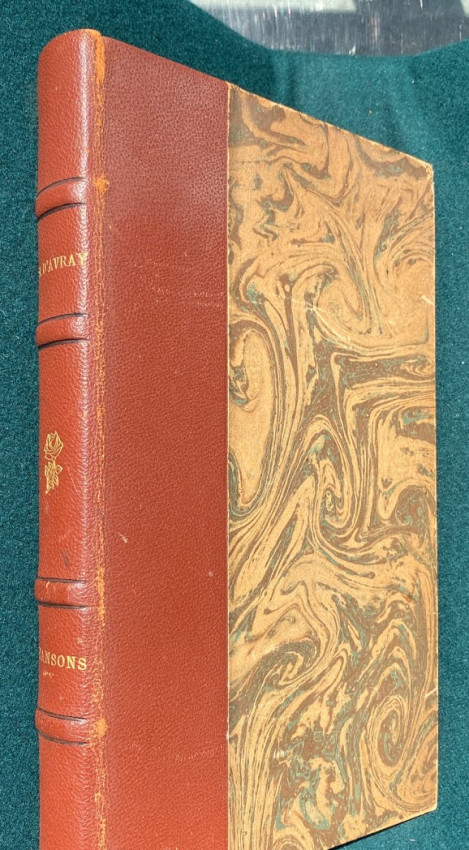 Sammelband of songs & music, all with contributions from D’Avray.

an extensive collection inscribed by D'Avray to Sonia May Malkine

ANARCHISM, SOCIALISM & the ARTS. - Charles D’AVRAY (aka Charles-Henri Jean, 1878-1960). Sammelband of 99 songs by D’Avray. Paris: [Dorey and others, circa 1937]. 99 works in one volumes, octavo (11 x7in; 280 x 178mm). Extra-illustrated with two mounted photographs, one of a young d'Avray, the second of a young woman (?Malkine) Leather-backed marbled paper-covered boards (rubbed), most pieces bound in with original wrappers. Provenance: Sonia May Malkine (1923-2014, affectionate inscription in French to 'May' on front free endpaper, signed, from Charles d'Avray); Sonia Malkine (bought from the estate).

A fascinating collection, from the library of Sonia Malkine, folk-singer and activist: the 99 works are generally not more than 4 pages long, are arranged alphabetically by title and include D'Avray's 'Le Triomphe de l'Anarchie'.

Translation of French Wikipedia entry: 'Charles-Henri Jean dit Charles d'Avray , born on September 9 , 1878in Sèvres and died on November 7 , 1960in Paris , is a French poet, songwriter, songwriter and anarchist performer . He writes hundreds of texts to denounce the State, religion, militarism, prisons, etc. and extol the libertarian ideal

Son of an architect, he came to Paris ... in 1898 after his secondary studies. He enrolled at the Conservatory of Music and composed his first "songs on the sidewalk" and "songs of vigils" which he performed in singing cafes.

At the time of the Dreyfus affair , he met the companion of the mother of Jeanne Humbert , militant libertarian, who introduced him into neo-Malthusian and anarchist circles where he frequented Sébastien Faure who had a great influence on him. It was at this time that the “social songs” and the “red songs” appeared, which he interpreted in the cabarets of the Butte Montmartre and the Latin Quarter . He met Gaston Couté , Aristide Bruant , Xavier Privas , Montéhus , Dominique Bonnaud .

Throughout his existence, he traveled around France in all directions, organizing lecture tours by song. Always dressed in a long black frock coat, he presented in a brief comment the work he was going to interpret, believing that the conference decorated with songs was the best form of propaganda.

In 1905, he was among the founders of La Muse rouge , "Revolutionary propaganda group through the arts", where in 1919 Lucien Noël, who was to become Christmas-Christmas , began, and André Isaac, the future Pierre Dac . Mobilized in August 1914, he remained there until March 1919.

In 1920, he again participated in anarchist galas both in Paris and in the provinces.From 1922 to 1925, he was the artistic director of the famous Montmartois cabaret "Le Grenier de Gringoire".

The 1 st February 1928, charged with "direct incitement to murder for the purpose of anarchist propaganda", he was sentenced by default - he took refuge in Belgium - one month in prison and 200 francs fine. On September 3, on appeal, the 11 th  Correctional Chamber reduced his sentence to one month suspended prison sentence.

After the Second World War, he continued to host libertarian galas. In 1949, he opened a new cabaret, "Chez l'vieux" where he sang with his former comrades in the "La Muse Rouge".

In March 1954, to help him, a gala was organized at the Hall of Learned Societies. In 1958, on the occasion of his 80th  birthday, a new gala gathered around him, among others, Roger Monclin , Noël-Noël , Jean Lumière , Jacques Grello and Jeanne Monteil . It is on this occasion that the disc "The old libertarian bard" is recorded and then engraved on vinyl....

He composed hundreds of songs, "more than a thousand," he said, and on various themes: red songs - including the famous Le Triomphe de l'Anarchie -, songs on the sidewalk, songs of vigils, etc.His sung lectures were announced by posters with this mention: "  With the past let us destroy the present to anticipate the future  ".

They consist of three types of songs:

those who propose to "destroy the past": The Giants on the Church, Les Favorites on courtesans, Monsters of the nobility, the Pyramids at the Invalides Napoleon I er , Bazaine Napoleon III, etc.

those which are directed against the III rd Republic: Do not vote any more , Bas Biribi , Magistrature , Militarism , Conscious procreation , Mister Schneider and Cie , etc.

those who exalt the libertarian society of tomorrow: Love and Will , Free Man , May Day , The Triumph of Anarchy , etc.' (wikipedia)