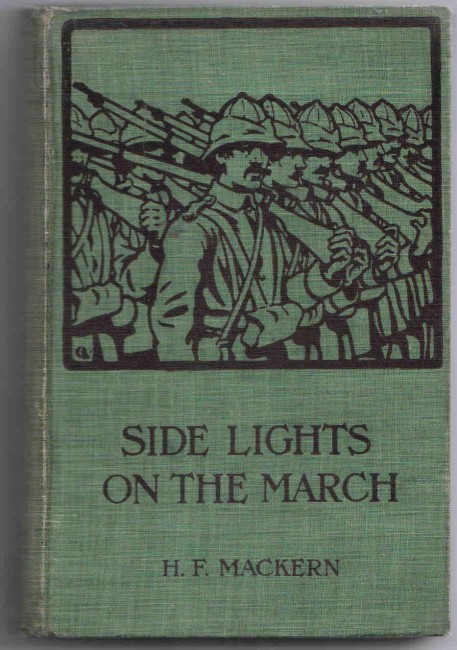 Side-lights on the March. The Experiences of an American Journalist in South Africa

Email or share
8vo; original green pictorial cloth, lettered in gilt on spine and in black on upper cover; pp. xv + (i) + 256; several plates. Spine slightly darkened and gilt dulled; gift inscription to front free endpaper; outer leaves and edges a little foxed, sporadic spottting elsewhere. Good condition. (Hackett, p. 167; Mendelssohn I, p. 956) \"The author, an American war correspondent, lays stress on the cordial good feeling which he found existing between the British Empire and the United States of America, on his arrival in South Africa. After some initial difficulties with Staff Officers at the front, he joined the forces under Lord Roberts, and was present at many of the exciting events of the campaign. On the whole, he expresses admiration for the British army and its leaders, but he was not impressed with either the discretion or the ability of many of its officers. Several incidents are related which bear on the cunning and resource of the Boers, but evidently Mr. Mackern was not of opinion that they had right on their side. The volume contains a graphic account of Roberts\' march to Pretoria, written by a friendly critic, who, like many other correspondents, seems to have considered the war to have ended after the occupation of Pretoria.\" - Mendelssohn.