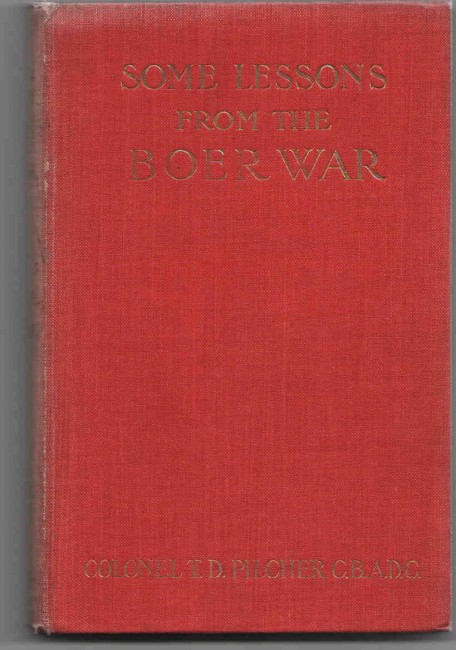 Email or share
Crown 8vo; original red cloth, lettered in gilt on spine and upper cover; pp. 141 + publisher\'s adverts. Bookplate of Winifred Coombe Tennant to front pastedown, and author\'s presentation inscription to her on verso of free endpaper. Spine mottled and sunned, slightly frayed at ends; upper cover partially sunned; pages very browned; endpapers foxed; brittle flyleaf torn partway along hinge. Good condition. (Hackett, p. 176; Mendelssohn II, p. 167) Treatise on several points emerging from the Anglo-Boer War, including its guerilla phase. Decidedly uncommon in first edition form. Chapter headings: Tactics, Discipline, Mounted Troops, Outposts, Horses, Information, Night Operations, Artillery, Pom-poms and Maxims, Miscellaneous. \'The author asserts that \"the whole system on which the Mounted Infantry is organised appears to be a wrong one,\" and he maintains that the excellent results attained were owing to the superior character of the men and officers supplied by the battalions from which these companies were drafted. Colonel Pilcher was not of opinion that the irregular troops were on the whole superior to the soldiers trained in the army, and he observes, \"Our experience of the latter draft of Yeomanry should be sufficient to prevent us from ever again attempting to raise more than a very limited number of mounted irregulars, in any country where their civil pursuits have not already rendered the majority of the inhabitants good horsemen.\"\' - Mendelssohn. Thomas David Pilcher (1858-1928) \"was twice mentioned in dispatches and received the Queen\'s and the King\'s Medal with several clasps. In 1901 he was made a C.B. At an early stage of the war he had been regarded as one of the discoveries of the British Army but he did not fulfil his early promise: his organisation of mounted infantry was relatively inefficient and at times he showed poor tactics. When the war was over he commanded a brigade in England as Major-General and was wounded in the First World War.\" - DSAB V, p. 590.