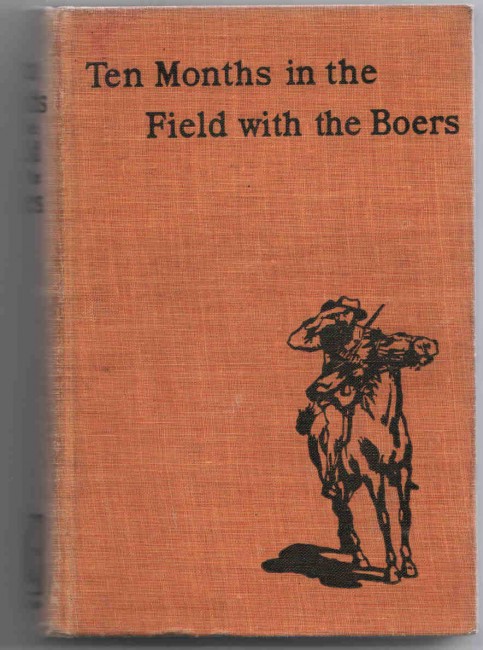 Ten Months in the Field with the Boers. By an Ex-Lieutenant of General de Villebois-Mareuil

Email or share
Crown 8vo; original orange cloth, with black lettering to spine and upper cover, and mounted Burgher emblem to upper cover; pp. (viii) + 248 + publisher\'s catalogue; frontis. portrait; folding map. Spine a little sunned and rubbed; lower hinge starting; occasional spotting; pencilled marginal annotation to page 108 (fascinating content, written by a firsthand observer, challenging the author\'s statements); small archival tape repair to reverse of map, well outside image area. Good condition. Uncommon. (Hackett, pp. 23, 144) \"Recollections of six months service with the republican armies. The author, Olivier d\'Etchegoyen, a French officer, joined Col. (later General) de Villebois-Mareuil near Kimberley, then besieged by the Boers. He gives a lucid account of the campaign in the western sector and of subsequent battles in the Orange Free State at which the \'Foreign contingent\' was present. The French General is much praised for his leadership of European volunteers but the Boer commanders censured for lack of military organization. Following the death of Villebois-Mareuil in action near Boshof (April 5) the writer continued service in the \'Foreign corps\' until disbandment in May 1900. He was captured in the Transvaal about a month later and permitted to leave South Africa.\" - Hackett: South African War Books, p. 23.