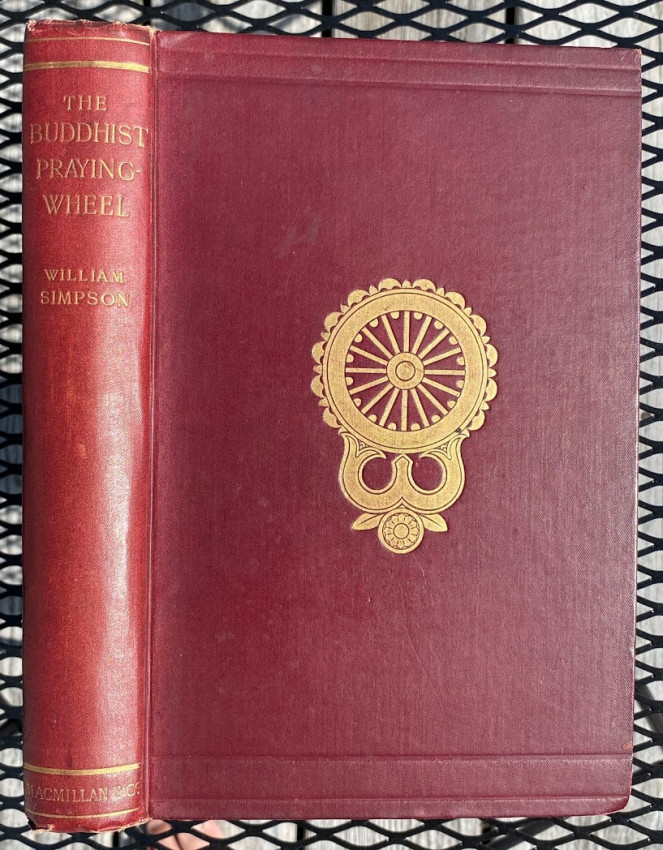 The author's own copy, with his bookplate.

The Buddhist Praying-Wheel A collection of material bearing upon the symbolism of the wheel and circular movements in custom and religious ritual. London: Macmillan & Co., Ltd, 1896. Octavo (8 7/8 x 5 3/4in; 225 x 146mm). P p.[i-]viii; [1-]304. Frontispiece, numerous illustrations, extra-illustrated with a loosely inserted alternative version of the illustration at p. 18, a 3pp. extract (by Simpson) from the ‘Journal of the Royal Asiatic Society’ mounted at the rear, original cloth gilt.

The Author’s copy of the first edition of this fascinating. The author spent some time in the Himalayas during the years 1860 - 61 and then passed over the boundary into Tibet and visited the Lamaseries and got interested in the so called "Praying - Wheel".

“A prayer wheel is a cylindrical  on a spindle made from metal, wood, stone, leather or coarse cotton. Traditionally, a mantra is written in Newari language of Nepal, on the outside of the wheel. The mantra Om mani padme hum is most commonly used, but other mantras may be used as well. Also sometimes depicted are Dakinis, Protectors and very often the eight auspicious symbols Ashtamangala. At the core of the cylinder is a "life tree" often made of wood or metal with certain mantras written on or wrapped around it. Many thousands (or in the case of larger prayer wheels, millions) of mantras are then wrapped around this life tree. According to the Tibetan Buddhist tradition based on the lineage texts regarding prayer wheels, spinning such a wheel will have much the same meritorious effect as orally reciting the prayers.” (wikipedia).Yakushi S517