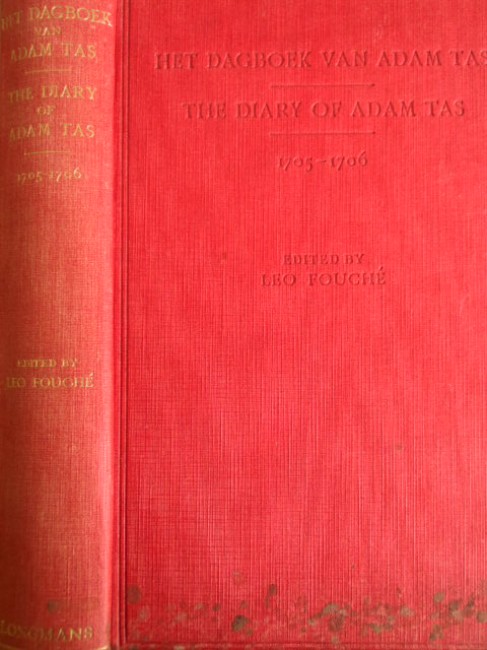 " . . . with an enquiry into the complaints of the Colonists against the Governor, Willem Adriaan van der Stel. With two maps"

This is the hundredth anniversary of the publication that inspired the formation of the Van Riebeeck Society, whose long and distinguished series of historical volumes included, much later, a newly edited and translated version of the Adam Tas Diary, whose revelations of complaints by Free Burghers against the administration of the Cape eventually led to the dismissal of Governor Willem Adriaan van der Stel. Despite the power of Adam Tas's pen, he was imprisoned for 13 months before being vindicated.

The original diary was lost, but two partial copies survived - one in the Government Archives in the Hague since 1706, covering the period 13 June to 14 August 1705, while the second of which, found in the South African Library in Cape Town at the end of 1911, made publication of the diary possible as it duplicated most of the Hague MS and additionally covered most of December 1705 and January and February 1706.

The South African Library appointed Fouche as editor and agreed that in addition to the diary there should be a discussion of the troubles and disputes in which Tas was involved. This additional material forms the appendix, which is longer than the transcript of the diary.

Our copy has damage to the upper panel, the top of the spine and the top edge of the lower panel. (See some of the images.) The copy is tightly bound. The top page edge shows the remnants of gilding; the bottom edge was untrimmed. The plain endpapers are unmarked, though lightly sunned and with a bookseller sticker on the front paste-down. The contents remain near-fine after a hundred years, complete, unmarked and undiscoloured - xlvii + 367 pp of introduction, diary, appendix and index + two maps (monochrome frontispiece and 2-colour folding map at the back), making this a very good copy of a historically important diary.