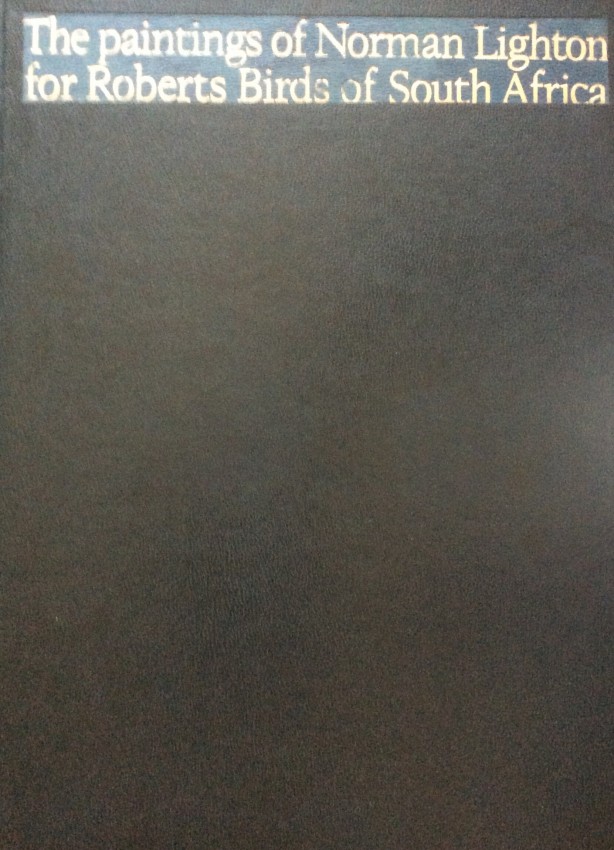 Bird, A V (author and editor); C S Barlow (foreword); and others

Cornfield endpapers with both free leaves printed in grey with an outline of an unidentified hawk, tipped-in colour frontispiece of perhaps the same bird (newly painted by Norman Lighton in 1976 for the first and subscribers' editions of this book), [12] pp of prelims + 51 full-page colour plates lithographed at two-thirds size from the originals painted by Lighton for the first and later editions of "Roberts", with the same number of obverse pp with captions for the plates.

NOTE ON MISSING PLATES. The original Plate 1 (Ostrich) was replaced with the new frontispiece referred to above. Plates 31 (Larks) and 32 (Swallows) were, as noted in A V Bird's introduction, "destroyed by enemy action during World War II", while Plates 40 (Cisticolas) and 48 (Sunbirds) "disappeared" - the second having been used by a tobacco company for making cigarette cards.

NOTE ON THE ARTIST. There is a great deal about Lighton, including a portrait, in the current book, but it was previously not generally known that Lighton was also responsible for the paintings in Priest's 4-vol set of the Birds of Southern Rhodesia (1933-1936) [see Lot 335] and for some of the paintings in the first part (East Africa) of the 6-vol African Handbook of Birds by Mackworth-Price and Grant [see Lot 358]. Equally little known before A V Bird's research was that Lighton (and Roberts) benefited from their study of the then-unpublished notebooks of C G Finch-Davies in the Transvaal Museum, of which Roberts was then Director and to which Lighton was seconded while he was painting the plates for "Roberts" [see Lots 207, 209, 210 and 356 in this auction].

CONDITION. The cover repairs have restored the "poor to fair" copy 68 of the Subscribers' Edition of 350 copies, signed by Bird and Lighton, to "very good". The copy is complete and otherwise unmarked and undiscoloured save for (1) very light sunning of the title-page in register with the tipped-in frontispiece and (2) faint light-blue smudges to the front page-edge (see image).