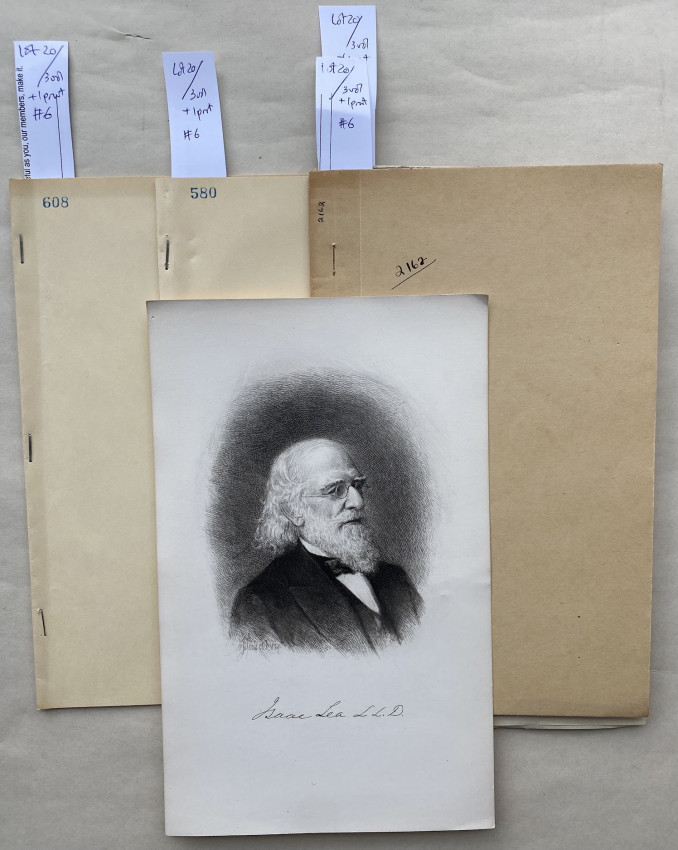 [Three malacological works, one inscribed to Lea, two by Lea; with an etched portrait of Lea]

The only conchologist to warrant a poem by Edgar Allan Poe 'It was my choice or chance or curse...'

Part of the ‘what is a species?’debate:  this paper, rare in this form (although there are three copies in the present collection!), concerns an exchange of ideas between Isaac Lea and Charles Des Moulins. The translator, Philip Houlbrooke Nicklin (1786-1842), adds his own introduction which shows that he supported Lea. The provenance (Isaac’ Lea’ copy) clearly makes this example particularly interesting.  Two decades after Nicklin’s death, Lea remembered his erstwhile supporter by naming Physa nicklini in his honor. OCLC 63631366 (3 locations listed).

A fine portrait of Lea in later life – in excellent condition. ‘A portrait painter and etcher, Stephen Ferris studied at the Pennsylvania Academy, with Samuel Waugh for two years in Bordentown, New Jersey and in Europe. He became a teacher at the Philadelphia School of Design for women for 26 years, and was an engraver for various publishers. … His wife, Elizabeth Moran Ferris was the sister of artists Edward and Thomas Moran. … He frequently demonstrated etching techniques, often at the Philadelphia Sketch Club of which he was a member. He exhibited at the Pennsylvania Academy, the Boston Art Club and in the Painters and Etchers exhibit at the National Academy of Design.’ (askArt).

‘Isaac Lea (March 4, 1792 - December 8, 1886) was an American conchologist, geologist, and publisher, who was born in Wilmington, Delaware. Although born a Quaker … Isaac Lea forsook his faith's traditional pacificism and joined the 7th Company of the 24th Pennsylvania Militia and fought in the War of 1812. … [In] 1821, he married Frances Ann Carey …, daughter of Irish-American publisher Mathew Carey, based in Philadelphia. … Mathew Carey retired in 1825, leaving his prosperous business in the hands of his son Henry Charles Carey and son-in-law Isaac. The publishing house became one of the most successful in America… Isaac Lea devoted his leisure time to natural history, both collecting objects and publishing books…  He was especially interested in freshwater and land mollusks, and for 50 years delivered and published scientific papers in the transactions of Philadelphia's scientific societies concerning these animals. He was a member … of the American Philosophical Society and also served as President of the American Academy of Natural Sciences…, both based in Philadelphia. Isaac Lea served as President of the American Association for the Advancement of Science in 1860. … In 1829 Edgar Allan Poe wrote a poem dedicated to Lea called "To Isaac Lea".’ (Shellers from the Past and Present).

Montana: the conductor and the indigenous leader

A fine set of works by J W Fletcher