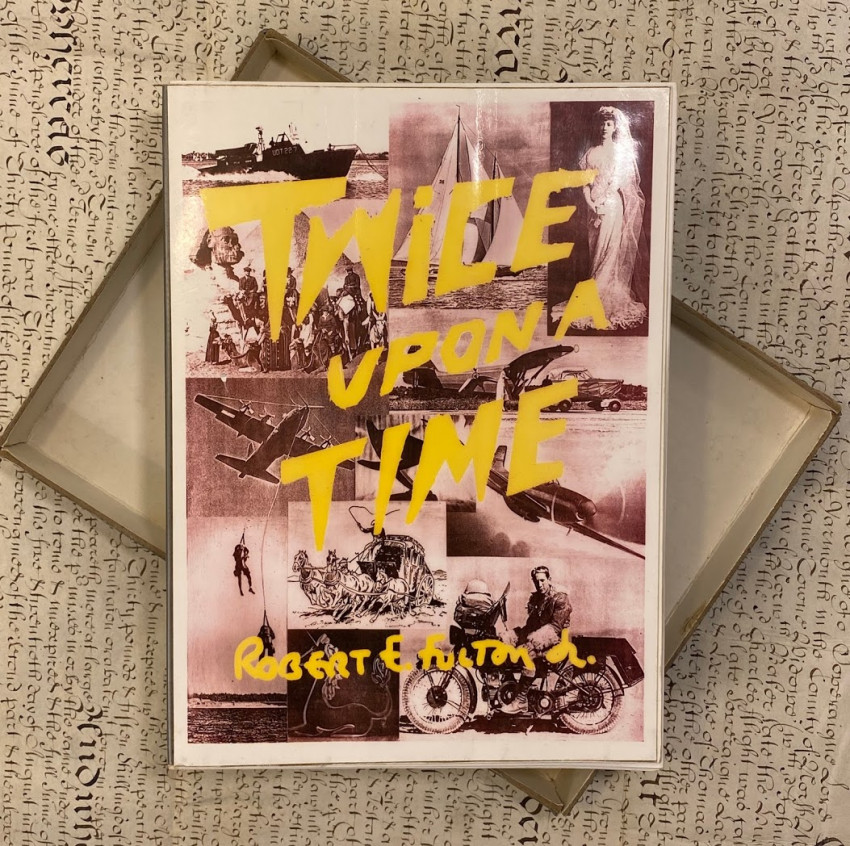 “Twice Upon a Time” A collection of autobiographical short stories

“Twice Upon a Time” A collection of autobiographical short stories with over 300 photographs, sketches, maps and montages by the author … [manuscript note:] “This is a home-made copy & binding. Handle gently" [No place, no date , but 1997]. Octavo (8 7/8 x 6 1/2in; 225 x 164mm). 359 pp., illustrations copy paper sheets trimmed to size. Unbound between original illuminated wrappers, backed with silver duct tape, clear plastic chemise, boxed.

Inscribed by Fulton to a family member on verso of front cover: “…This is a 359 page letter to help you lead a double-life: your own & that of your nearly 90-year old grandfather…”

Includes over 300 black-and-white reproductions of photographs, sketches, and maps. Although a March 1998 article in the New York Times mentioned that Fulton had just finished writing a collection of autobiographical essays called Twice Upon a Time, it was never officially published. It is our understanding that this copy is one of only ten put together by Fulton for family members.

After graduating from Harvard with a degree in architecture, Robert Edison Fulton, Jr. (1909­–2004) made some modifications to his Douglas twin-cylinder motorcycle (additional gas tank, compartment for his .32-caliber revolver, etc.) then set out to travel the world. Beginning in London in May of 1932, he rode approximately 25,000 miles through 32 countries in 18 months, shooting 40,000 feet of film along the way. He later chronicled his experiences in his book One Man Caravan (1937). Sixty years later, in Twice Upon a Time, he again wrote about his trip as well as the publication of its account.

Among other things, Fulton was a prolific inventor who registered over 70 patents in his lifetime. One of his most famous inventions was a flying car—the Airphibian—which was actually a plane that could be converted into a car by removing its wings and propeller in under five minutes. It took its first flight in 1947 and was flown by Charles Lindbergh in 1950. Due to the high manufacturing costs, Fulton eventually sold his Airphibian company to a larger one, who never produced it. The only remaining model is at the Smithsonian. He also developed a device nicknamed the “Skyhook” for the CIA. It was used to pick spies off the ground during the Cold War, though it’s better known for its appearance in the 1965 James Bond movie Thunderball.