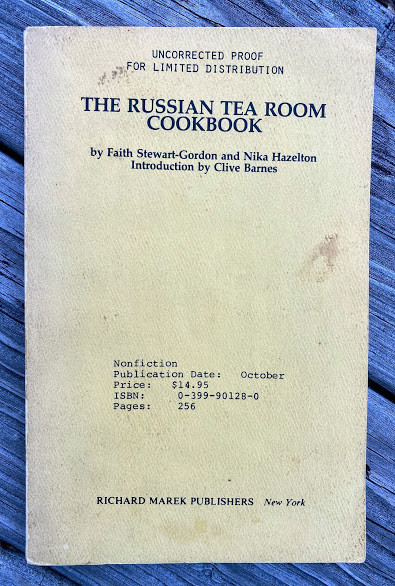 An inscribed copy of the ‘Uncorrected Proof / for limited distribution’: a cookbook, but also a memento of a New York City ‘landmark’.“ The Russian Tea Room was opened in 1927, by former members of the Russian Imperial Ballet, as a gathering place for Russian expatriates and became famous as a gathering place for those in the entertainment industry. The founder is often considered to be Polish-born Jacob Zysman, but in that year, a corporation directory lists Albertina Rasch as the president, and her name appears along with Russian Art Chocolate and Russian Tea Room, in early photographs of the shopfront at 145 W. 57th St. In 1929, the business moved across the street to its present location, which at that time was an Italianate brownstone, built in 1875 by German immigrant John F. Pupke, a tea and coffee merchant, whose son later moved the large clan to Long Island, seeking a more relaxed lifestyle.

By 1933, the Siberian émigré Alexander Maeef was running the Russian Tea Room and was the main personality associated with the restaurant for the next fifteen years. 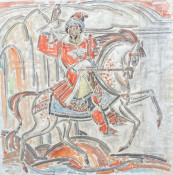 An original study for ‘Hunting in XVI Century in Russia’